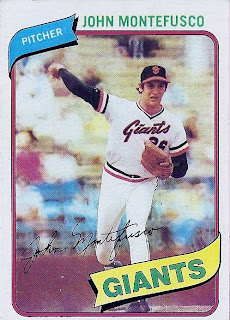 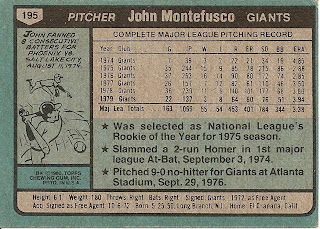 Who is this player?
John Montefusco, starting pitcher, San Francisco Giants
By the time this card was being pulled from packs in 1980, John Montefusco was no longer seen as the colorful eccentric ace of the San Francisco Giants. "The Count" began the season inconsistently and drew the wrath of manager Dave Bristol when he missed a start in May to a sore throat. He was sent to the bullpen for a month and later got into a fight with Bristol after a game in June. He went on the disabled list with a cracked rib and missed more than a month of action. He finished 1980 with only four wins and was traded to Atlanta in December for Doyle Alexander.

Discovered by Giants scouts while playing in a New Jersey industrial league, the righthanded Montefusco was signed as a free agent in 1972. He quickly became known for his predictions, boldly stating he would make the Giants staff in two years. True to his word, he was given a September look in 1974. That performance earned him a spot in the starting rotation for the 1975 season, which would ultimately become his most memorable.

Starting the season 5-0, the brash righthander taunted opposing players, specifically the Los Angeles Dodgers, reigniting the legendary feud between the two teams. He predicted that he would shutout teams and strike out star players. As his win total increased, he also began to openly campaign for the Rookie of the Year award. He finished the year with 15 wins and was seventh in the league with a 2.88 ERA. At season's end, he did indeed win the Rookie of the Year and was even fourth in the Cy Young voting. At 25, it seemed that "The Count's" best years were ahead of him.

John picked up where he left off in 1976, predicting that he would win 20 games and the Cy Young Award. He was selected to the All-Star Game that season and pitched two innings of scoreless relief. The highlight of the season came on his last start of the season, where he pitched a no-hitter against the Atlanta Braves. In all, John won 16 games in 1976 and led the league with 6 shutouts. The injury bug hit Montefusco in 1977 and it effected every following season John spent in San Francisco. His injuries reduced him to an average pitcher and he never regained the status that he enjoyed in 1975-76.

Traded to Atlanta for the 1981 season, Montefusco became somewhat of a journeyman, with stops in San Diego and then to the New York Yankees. He made an effort to change his image as a free-spirit, likely due to his final days in San Francisco. He became a swingman for the remaining years of his career. When the Yankees released him in May of 1986, his 13-year career had come to and end. He was the manager and pitching coach of the independent Somerset Patriots of the Atlantic League in the early 2000s. Today, Montefusco is enjoying retirement in his his native New Jersey.

Why I love this card
This was one of the names that we had a lot of fun of as a kid. We alternated between "Monte-FUSS-ko" and "Monte-FOOS-ko." Amazing how much time we spent arguing that point. And after going on about the pickoff picture on Dave Goltz, low and behold, here's another one.

Something else....
In recent years, Montefusco has had significant domestic issues that even led to his brief inprisonment. More about that can be read here. He even sued ESPN during this period because they referred to him in a similar vein to O.J. Simpson.
Posted by Dean Family at 10:24 PM