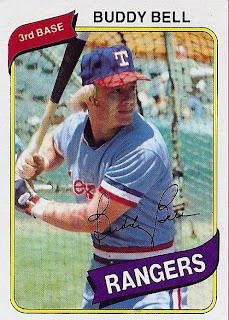 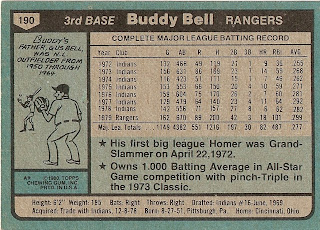 Who is this player?
Buddy Bell, third baseman, Texas Rangers
Due mainly to the outstanding season by George Brett, the season put forth by Buddy Bell in 1980 went largely unnoticed. However, there was little doubt that when the year ended, Buddy Bell was one of the finest third basemen in the game. He was recognized as an All-Star and was the AL's Gold Glove winner at third. His batting average was among the league leaders for the entire year and he finished with a career high .329 average. When Pat Corrales was fired as Rangers manager, Bell asked to be traded.

Born the son of major leaguer Gus Bell, young Buddy had the pedigree for baseball stardom. He was a multi-sport star in high school and led his team to a baseball league championship. The Indians drafted him in 1969 and he was in the major leagues within three years. He was voted to the Topps rookie team in 1972 and was the Indians' representative in the 1973 All Star Game, where he had a triple in his only appearance.

The righthand hitting Bell spent seven seasons in Cleveland, where he established himself as a solid fan favorite. He consistently led his teams in several offensive categories, yet was overlooked due to the poor performance of the Indians during this time. He was traded to Texas for Toby Harrah in December 1978 in an unpopular move in Cleveland. It was in Arlington that Bell elevated his game. He won six consecutive Gold Gloves, batted .290 or better five times and was the Silver Slugger winner in 1984.

In the middle of the 1985 season, Bell was traded to the Cincinnati Reds, where his father also had been a fan favorite in the late 1950s. This was a very popular addition with Reds fans, and Buddy responded with two more solid years. In 1988, he began to fade, and was traded to the Houston Astros. Bell was released in December and returned with the Rangers for the 1989 season, his 18th and final season.

After several seasons as a major league coach, Bell was given his first managerial position in 1996 with the Detroit Tigers, and was later named manager of the Colorado Rockies and Kansas City Royals. Bell took a medical leave of absence in 2006 when a lump was discovered on his tonsils. He retired from managing after the 2007 season to spend more time with his family, primarily due to his cancer diagnosis.

Why I love this card
Way before "Field of Dreams" the cartoon on Bell's card struck a cord with me. Playing catch with my Dad was always a big deal, and the cartoon is what I thought things would be like when I grew up. Of course, I would be in the major leagues and still playing catch with my Dad. I never got to be in the majors, but did play "Running Bases" catch with Dad this summer with my son in the middle. No matter what, an awesome memory.