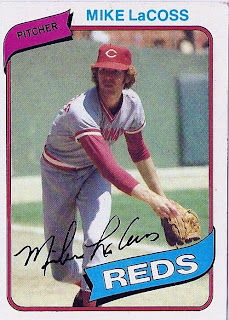 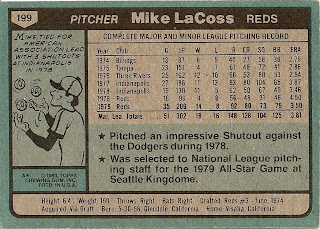 Who is this player?
Mike LaCoss, starting pitcher, Cincinnati Reds
As one of the promising young pitchers in the National League, Mike LaCoss began the season as the #2 starter on the defending NL West champion Cincinnati Reds. He began quickly, winning his first three decisions including a complete game shutout. However, LaCoss did not have a particularly good season in 1980 and the Reds finished in third place. His ERA rose over a full run from the previous season and he finished with a losing record (10-12). While there was some concern within the Reds over LaCoss' performance, the team was hopeful that a return to form was in the cards in 1981.

Selected by the Reds in the third round of the 1974 draft, the righthanded LaCoss had a decent minor league career, earning the attention of the parent club in 1978. It was in the minor leagues that he earned his nickname "Buffy" after the star of "Family Affair." When he notched 11 wins in less than half of the year, the Reds promoted him to Cincinnati and he made his major league debut on July 18, 1978. Although he finished the year 4-8, the Reds only scored 13 runs in his eight losses and he entered 1979 a part of Cincinnati's starting rotation.

1979 would be one of the best season's of LaCoss' career. He began the year 8-0 and earned a spot on the National League All-Star team. He was consistently among the league ERA leaders until a late season slump took him out of consideration. His 14 wins were a career high as the Reds went to the playoffs before losing in the NLCS. LaCoss would never regain his 1979 form in Cincinnati and after a poor 1981 season (4-7 6.12 ERA) he was released by the Reds. Fortunately, he was quickly signed by the Houston Astros. He spent three nondescript years (1982-1984) in Houston were he served as a reliable swingman and middle reliever.

Mike spent the first half of 1985 with the Kansas City Royals but was sent to the minor leagues in August, missing the Royals' World Championship run. He signed as a free agent with the San Francisco Giants where his career was extended by Roger Craig and the split-fingered fastball. Commanding the pitch, LaCoss was placed into the starting rotation, where he spent the next six seasons, winning 47 games. He also twice appeared in the post-season with San Francisco, including his only World Series appearance in 1989.

Knee surgery ended his 1990 season prematurely, and LaCoss' 14-year major league career ended the following year when he was released midway during the 1991 season. He appeared at the closing ceremonies at Candlestick Park in 1999 and like most of his contemporaries he shared his skills as a coach. Most recently he was a roving minor league pitching instructor with the Cincinnati Reds.

Why I love this card
I didn't know about the "Buffy" nickname at the time. If I had, it probably would have really creeped me out . What I do remember is the mention of the All-Star game on the reverse. For the longest time, anybody named as an All-Star in my mind was a notch above the "common" player. I had yet to figure out the cards ending in 5 or 0 were the true indicators of star status.

Something else....
LaCoss hit his only career home runs in consecutive at-bats though in different games. The first was on June 23, 1986 off utility infielder Dane Iorg, who was pitching at the end of a 18-1 Giants win. Six days later, in his first at-bat, he homered off Tom Browning.
Posted by Dean Family at 9:34 PM