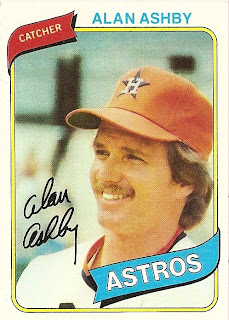 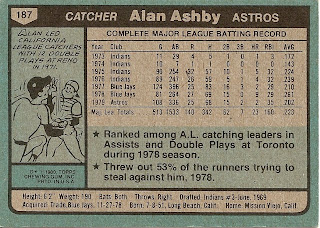 Who is this player?
Alan Ashby, catcher, Houston Astros
As the everyday receiver of the 1980 NL West champions, Alan Ashby was responsible for handling one of the best pitching staffs in the game. Although he often batted in the bottom third of the order, the switch-hitting Ashby was adept with the bat as well. With Houston fighting off the challenge of the Los Angeles Dodgers, Ashby batted .429 the final week of the season. Ashby was involved in a collision with Dodger Joe Ferguson that injured a rib and caused him to miss most of the NLCS against the Phillies. He had a clutch single in the deciding Game 5 to tie the game but Houston fell to Philly in ten innings.

A graduate of San Pedro High School in Los Angeles, Ashby was a high school teammate of Phillies' outfielder Garry Maddox. Ashby was originally a third round selection of the Cleveland Indians in the 1969 amateur draft. He received a September look in both 1973 and 1974, but essentially toiled in the bush leagues for six seasons. Alan made the Indians club in 1975 but was a reserve in Cleveland. He had the distinction of being the first ever player acquired via trade for the Toronto Blue Jays when he was traded from Cleveland to Toronto on November 5, 1976 in a package deal.

He was the first everyday catcher for the Blue Jays, appearing in 124 games. With the emergence of Rick Cerone and Ernie Whitt, Ashby was traded again, this time to the Houston Astros in 1979, where he gained his greatest fame. In addition to helping lead the Astros to their first playoff appearance, Ashby was also a key reason they returned to the playoffs in 1981. He won the opening game of the NLDS against the Dodgers with a home run, but again the Astros dropped the postseason series.

In 1982, Alan became the first Astro to ever homer from both sides of the plate in a September game against San Diego. Ashby tied an NL record by catching three no-hitters during his career, the third being Mike Scott's 1986 division title clincher. In the NLCS against the Mets, Ashby continued his timely post-season hitting, with another home run that won Game Four, tying the Series. Again though, the Astros lost the NLCS, this time in six games. Ashby played 11 years in Houston and became one of the teams' most recognizable faces. In 1989, Ashby was released by the Astros in May. Rather than go to the Pirates in a trade, he retired, ending his 17 year major league career.

Since his playing days, Ashby worked as a sports anchor in the Houston market, managed for several years in the minor leagues and even served a stint as Astros bench coach. At closing ceremonies for the Astrodome, he was named the club's greatest catcher. He became the Astros radio voice in 1998, a position he held for eight seasons. Today, he is on the radio with another one of his old teams, the Toronto Blue Jays.

Why I love this card
I have to imagine that Topps purposely didn't center this photo of Ashby. Somehow, I think if they did, this card wouldn't be so memorable for me. There seems to be perfect symmetry between the photo and Ashby's signature. I still think of this card as as reference point when I see Ashby's name somewhere.

Something else....
Ashby and Astro teammate Phil Garner did a Burger King commercial sometime in the early 1980s. Everything about this screams 1980s Here's a still: 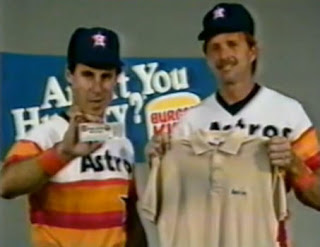 You can watch the entire commercial here.
Posted by Dean Family at 11:32 PM