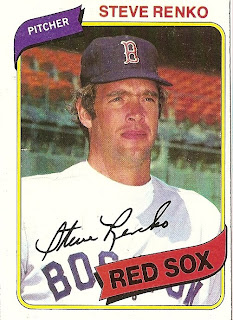 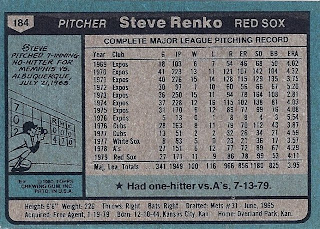 Who is this player?
Steve Renko, starting pitcher, Boston Red Sox
Originally sent to the bullpen when the 1980 season began, Steve Renko was inserted into the Red Sox rotation in late May when Dennis Eckersley was injured. In his first start, he pitched a complete game victory and the 35-year old righthander went on to win nine games (second on the club). Renko was a reliable, yet unspectacular starting pitcher that pitched 5 or more innings 18 times in 1980.

A three-sport athlete at the University of Kansas, Steve Renko was the quarterback on the Jayhawk team that featured NFL Hall of Famer Gale Sayers. He was drafted by both the Oakland Raiders and New York Mets and chose a baseball career in 1965. The Mets left him unprotected in the National League expansion draft and Renko became one of the original members of the Montreal Expos.

Renko was part of the Expos' rotation for part of eight seasons, where his 68 victories still place him fifth on the franchise's all-time list. Additionally, he is fourth in games started and innings pitched; seventh in strikeouts. He was the Expos Opening Day starter in 1974 following arguably his best season in 1973. In addition to winning 15 games, he was seventh in the league in ERA (2.81) and was the team leader in nearly every pitching category.

He became somewhat of a journeyman pitcher in the mid-to-late 1970s, pitching with the Cubs, White Sox, A's and Red Sox during the last four seasons of the decade. He had a losing record during this span, pitching mainly for bad teams. A highlight came in 1979, where he pitched a one-hitter that was broken up by Rickey Henderson in the ninth inning. In all, Renko fired five one-hitters during his career.

After the 1980 season, he was part of the Fred Lynn trade and was an important part of the 1982 AL West champions, winning 11 games. The final season of his 15-year career was the 1983 campaign that he spent with the Kansas City Royals. He spent many years as a minor league pitching coach most recently with the Charleston River Dogs.

Why I love this card
In 1980, I don't think the word "unibrow" was invented but even back then I was intimidated by Renko. Whether it be the glare/snarl he's apparently giving the camera or connection of his eyebrows, this card gave me the willies. Until right now, I don't think I've looked at this card since it originally went into my set.

Something else....
Renko's card is another one of the double printed versions.
Posted by Dean Family at 11:52 PM