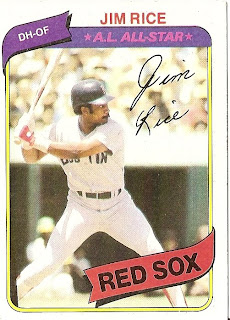 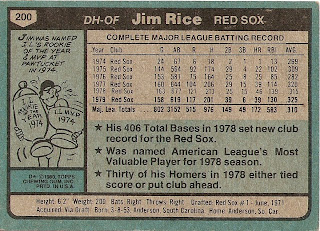 Who is this player?
Jim Rice, left fielder, Boston Red Sox
Hall of Fame, Class of 2009
Probably the most feared righthanded hitter in the game at this time, if you got a Jim Rice card in 1980, it would be a good day. After a strong start, Rice suffered through an 0-18 slump in May and was hit by a pitch in June. He suffered a fractured wrist and missed more than a month over the summer, including the All-Star Game where he was voted by the fans to start. He regained his stroke upon his return and was named AL Player of the Month in September. Rice finished the year with 24 home runs, which still placed him ninth in the American League.

Jim Rice played his entire 16-year career in Boston, linking him with Ted Williams and Carl Yastrzemski in a lineage of Hall of Fame left fielders that stretched for 50 seasons. A product of Anderson, South Carolina, Rice was signed by scout Mace Brown. Jim was the first selection of the Red Sox in 1971 and proceeded to dominate the minor leagues. His team won the Junior World Series in 1973 and Jim was the International League MVP and Triple Crown winner the following year. He was promoted to the Red Sox in the latter stages of the 1974 season, poised to make history.

In 1975, with fellow rookie Fred Lynn, the "Goldust Twins" led the Red Sox to the AL pennant. Unfortunately, Rice missed the postseason, including the famous 1975 Series, thanks to a broken hand suffered on September 21. Rice became a perennial All-Star, being so honored nine times during his career. He was also a consistent MVP candidate, winning the award in 1978 in what would be the finest season of his career. That year, he led the league in hits, slugging, triples, home runs and RBI. Amazingly, his 406 total bases that year established a franchise record on a team historically renowned for its hitters.

Rice indeed have a prolific career at the plate. He led the league in homers three times, total bases four times and had 100 RBI in a season on eight different occassions. He helped lead the Red Sox back to the World Series, this time in 1986 and Rice batted .333 in Boston's heartbreaking loss. While not acknowledged for his fielding, he mastered the Green Monster in left as had his predecessors. He was also known for grounding into double plays, for which he set a single season record in 1984 with 36.

After his playing days ended unceremoniously in 1989, Rice stayed within the Red Sox family as a coach and broadcaster. As the Red Sox gained prominenance in the 2000's, Rice's case for the Hall of Fame grew stronger. He was inducted in 2009, his final year of eligibility and the Red Sox honored him by retiring his number. Despite a summer of accolades, Rice caused a minor contoversy by criticizing Manny Ramirez, Alex Rodriguez and Derek Jeter.

Why I love this card
This card captures Rice perfectly at this stage in his career. He is truly intimidating here as he awaits the pitch. Flip the card over and absorb the stat line that he has put forth at this point. I can remember sitting on the porch being in awe at Rice's combination of power and average. I thought he was a Hall of Famer for sure. Granted, while the 1980s wore on my opinion on Rice changed. Injuries limited him and I didn't view him as a Hall of Famer, but every time I see this card, I remember the other side of the argument.

Something else....
I think the Rice was unfairly given the persona of being moody or uncooperative. During his entire career he lended his time and name to children's charity and I personally witnessed him sign autographs for kids while skipping over adults. Here is a story of how he saved a young fan's life in 1982.

Pictured below is Jim Rice's 1980 Topps Burger King card. At first glance they appear to be the same card, but the BK card's photo of Rice is slightly moved to the left. Likewise, you can see Rice's right foot under the Red Sox banner which seems to be the bold font as compared to the base set issue. 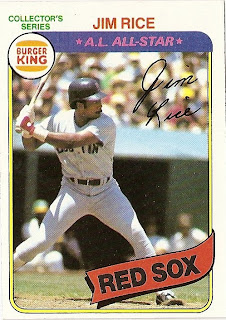 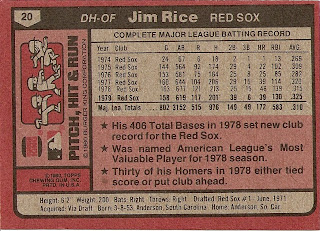