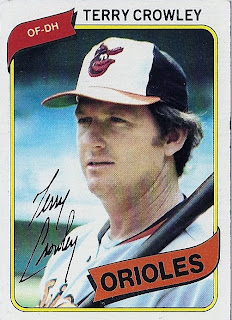 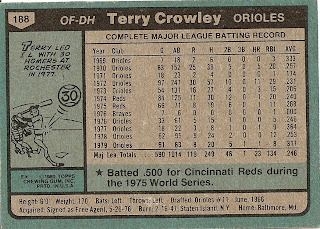 Who is this player?
Terry Crowley, designated hitter, Baltimore Orioles
At this point in his career, Terry Crowley had already established that he was a major league hitter. The lefthanded batter earned a daily spot in the lineup in 1980 and was most often used as a DH, while also providing clutch pinch hits off the bench. His average hovered over .300 for most of the season and he had three hits in a game on six different occasions. He finished with a career high 12 home runs and 50 RBI but the Orioles failed to repeat as AL East champions despite winning 100 games.

Terry attended Long Island University, where he was named All-American and All-Met Conference in baseball. He attracted the attention of major league scouts and was selected by the Orioles in the 11th round of the 1966 draft and made his debut three years later. The following season, Crowley spent the entire season with the Orioles and appeared in the World Series as the Birds won their second championship in five seasons.

In 1973, Crowley became the Orioles first-ever designated hitter but at the end of the season he was sold to the Texas Rangers. He spent only one season in Arlington and was sold again, this time to the Cincinnati Reds. Crowley again had the opportunity to appear in the World Series in 1975, again finding himself on the winning side when the Reds captured the championship. He was on the move again though, being traded to the Braves in 1976, his third team in four years.

He only appeared in seven games for the Braves and returned to the Orioles where he spent 12 of his 15 major league campaigns. He and the Orioles returned to the World Series in 1979 and his pinch-hit double helped break open a Game 4 win for Baltimore and a 3-1 Series lead. Unfortunately, the Orioles lost the Series in seven games. Terry's final season was in 1983 as a member of the Montreal Expos. He retired with 108 career pinch hits, good for sixth on the all-time list (now 13th).

Upon his retirement, he immediately went into coaching, spending four years (1985-1988) with the Orioles as their hitting coach. He moved on to the Minnesota Twins in 1991 where he spent eight seasons as hitting coach including the 1991 World Championship season. He returned to the Orioles in 1999 and has since become a fixture in Baltimore. Crowley is signed to return to the Birds for his 12th consecutive season in 2010 surviving five different managers.

Why I love this card
One of the things I remember doing during the summer of 1980 was learning how to keep score. I would eventually do it to games on television and I can remember having these cards out during Tigers-Orioles games, trying to keep up. Crowley, John Lowenstein and Gary Roenicke always seemed to kill the Tigers and I always spelled their names wrong when the cards weren't there. Crowley was "Crowly" and this card helped me make sure I didn't repeat my mistake.

Something else.....
The entire time I watched "The Shield" I would think of this Crowley before that Crowley. However, no mention of Crowley would be complete without a "Manager's Corner" reference. I wonder what Alice Sweet is doing these days?
Posted by Dean Family at 10:23 PM