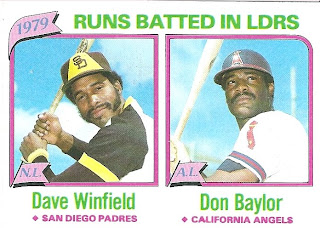 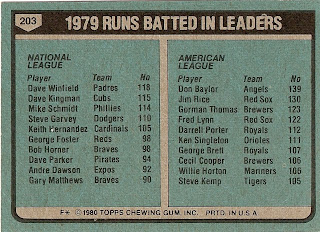 What is this card?
1979 Runs Batted In Leaders Card
Don Baylor of the AL West Champion Angels led the majors with 139 RBI. Dave Winfield of the San Diego Padres was the National League Leader with 118. Baylor is the first player to appear on a Leader card that also made it to the postseason in '79, while Winfield is the first future Hall of Famer.

How was the race? Both men had significant challenges from multiple pursuers. Winfield sewed up the NL race with two 4-RBI games in September to hold off Dave Kingman and Mike Schmidt. Baylor surged ahead in late-August with an 8-RBI game. The runner-up in the AL, Jim Rice (130), along with Gorman Thomas (123) and Fred Lynn (122), would all have led the National League with their RBI totals.

Where are the 1980 League Leaders? Mike Schmidt, the NL leader was third in the league while Cecil Cooper of the Milwaukee Brewers placed eighth on the American League leaderboard.

Did these players ever repeat? No. While Winfield would place in the Top 10 on ten different occasions during his career, the highest he ever finished was third. Baylor, meanwhile, only placed one more time among the league leaders in RBI.

Why I love this card
Two completely new guys pictured. Winfield in particular was foregin to me because the Padres were rarely on TV and weren't known for great players. I also thought that it was strange that the AL Top Ten outweighed the NL's in RBI, but the opposite was true for home runs.

Something else....
I am glad that Topps decided to write out Runs Batted In instead of abbreviating it. If anything, they decided to truncate "Leaders" into LDRS.
Posted by Dean Family at 11:59 PM