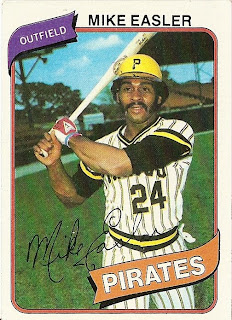 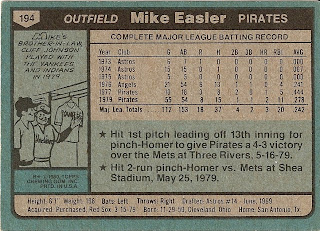 Who is this player?
Mike Easler, leftfielder, Pittsburgh Pirates
Always a good hitter, Mike Easler had difficulty cracking the lineup of the Pittsburgh Pirates. When the injury bug bit the Buccos, the lefthand hitting Easler took full advantage of his opportunity to play every day. Inserted in leftfield in mid-May, his batting average rose over .400 in early June and he hit for the cycle. "The Hit Man" did just that, and his average remained over .350 for most of the summer. While he did not garner enough plate appearances to qualify for the batting title, Easler finished the year at .338 and established himself as a fixture in the Pittsburgh lineup.

Mike Easler was drafted out of high school by the Houston Astros in 1969 and signed in return for a $500 tuition payment at Cleveland State University. He would be a batting champion and All-Star in the minors, but would spend the next 10 years struggling to make the major leagues with five organizations. He was given brief looks by the Houston Astros, California Angels and Pittsburgh Pirates and was nearly released by the Pirates in 1979. He saved his job with game-winning home run and the Pirates went on to win the World Championship.

He was named a National League All-Star in 1981, walking an scoring a run in the NL's victory in Cleveland. Easler was a .302 hitter during his days in Pittsburgh, averaging 13 HR and 56 RBI a season. Since Easler was a poor defensive player, he would often be replaced in the later innings. When the team decided in 1984 to rebuild around speed, defense and pitching they traded Easler to the Boston Red Sox for pitcher John Tudor.

Stationed as the Red Sox designated hitter, he appeared in career-high 156 games and had one of his best seasons, batting .313 with 27 HR and 91 RBI. His production slipped the following year and he was traded to the New York Yankees for fellow DH Don Baylor. He spent a season in New York, but was unhappy and demanded to be traded. The Yankees granted his wish and traded him to the Philadelphia Phillies, where he appeared in 33 games before he was traded back to the Yankees to finish the 1987 season. It would be the last in his 14-year major league career.

After his playing days, Easler spent many years as a hitting instructor and manager at the minor league level. He has also served as hitting coach for four major league teams, most recently the Los Angeles Dodgers in 2008. He replaced the recently-named Don Mattingly as coach when Mattingly left the team for family reasons. When Mattingly returned, Easler was demoted within the organization. He filed a grievance against the Dodgers in 2009 something he also did when let go by the Red Sox (in 1995) and Cardinals (in 2001).

Why I love this card
As a kid, we went to a Tiger game once or twice a year. It was a pretty big deal and it would be on the calendar for weeks. My Dad allowed me one souvenir and I always chose one of those plastic replica batting helmets. In 1980, my collection was thin. I got a Tiger one at my first ever game and a Pirate one at my second game in May 1980. This Easler card reminds me of my Dad getting me started on those helmets. In time, several of them broke or were lost, but I still have my Pirate one.

Something else....
Easler is married to the sister of contemporary major leaguer Cliff Johnson, who played 15 years with seven different teams, most notably the Blue Jays.
Posted by Dean Family at 11:43 PM