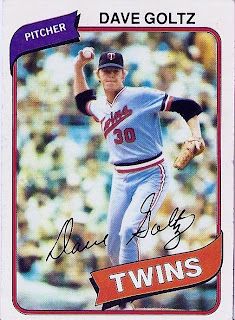 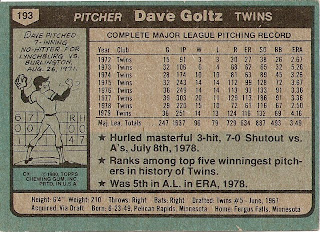 Who is this player?
Dave Goltz, starting pitcher, Minnesota Twins
After averaging 14 victories for the six straight seasons, Dave Goltz signed a huge $3-million dollar contract with the Los Angeles Dodgers for the 1980 season. While Goltz was in demand, the six-year deal raised eyebrows around the league. He threw two complete-game shutouts in April, but lost five decisions in a row and didn't earn another victory until August. By then, his contract was being openly questioned and Goltz finished the season with a 7-11 record. He was given the ball for the one-game NL West playoff with the Houston Astros, but Goltz and the Dodgers lost 7-1.

The righthanded Goltz was the first native Minnesotan signed by the Twins to reach their major league roster. He was selected by the Twins after a scout discovered him throwing in his backyard the previous year. His rise to the major leagues was deterred by some arm trouble in the minors and a tour of duty in Vietnam in 1969. He did, however, rebound to fire a no-hitter during a 14-win 1971 campaign split between two Single-A clubs. He made his major league debut in 1972 against the New York Yankees at Yankee Stadium.

In his eight years with the Twins, Goltz became the fourth winningest pitcher in club history, never having a losing season. He established himself the ace of the staff in 1977 when he led the league with 20 wins and logged 303 innings pitched. He also led the league in games started and finished six in the AL Cy Young Voting. Goltz was also a notorious slow starter, having never won a game in April until 1979. Despite that, his 96 wins in a Twins uniform established him as a workhorse and one of the better pitchers in the league at that time.

Moved to the bullpen in 1981, Goltz made his first appearance in the postseason as the Dodgers advanced to the World Series. Dave pitched in two Series games as Los Angeles won their first World Championship in 16 years. When he started poorly to start the 1982 season, he was released by the Dodgers. The California Angels quickly signed him and he went 8-5 as the Angels went on to win the AL West. Goltz again pitched in the postseason, but California fell to the Milwaukee Brewers in five games. An 0-6 start, in addition to a torn rotator cuff, ended his 1983 season in June and would also end Goltz' 12-year major league career.

In retirement, Goltz has made a recent living making personal appearances and motivational speaking. Our friends over at Project Baseball 1976 even found that he did some work as an umpire for high school baseball games.