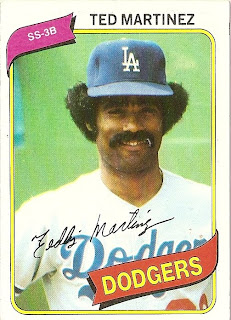 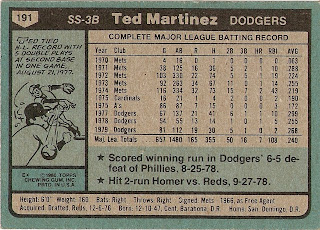 Who is this player?
Ted Martinez, utility infielder, Los Angeles Dodgers
When the 1980 season opened, Ted Martinez was not on the Dodgers major league roster. He spent the entire season at Triple-A Albuquerque in the Pacific Coast League. Playing primarily shortstop, he struggled at the plate, hitting only .234 and was not recalled for the Dodgers NL West stretch drive. Martinez would not return to the major leagues, ending a nine-year major league career.

Born Teodoro Noel Encarnacion Martinez in Barahona, Dominican Republic, Teddy Martinez was a signed as a free agent by the New York Mets in 1966. A solid minor league hitter, Martinez was groomed as a shortstop, but found his path to the majors blocked by Bud Harrelson. He made his debut in 1970 and eventually worked his way onto the Mets roster as a valuable defender.

Martinez was a valuable addition as a versatile player that could play three infield and all outfield positions. As part of the eventual 1973 NL East champions, Teddy had a 4-RBI game against the Phillies that included a home run off of Hall of Famer Steve Carlton (Martinez hit only seven HR in his career). This game would be part of a furious Mets rally that saw them win the pennant and storm into the World Series, only to fall to the Oakland A's in seven games. Martinez saw action in that Series, twice appearing as a pinch runner.

Traded to the St. Louis Cardinals in 1975, he split the season between St. Louis and Oakland, with whom he would again appear in the postseason. Martinez saw action in all three games of the ALCS, but the A's were swept by the Boston Red Sox. He was released by the A's in early 1976 and signed on with the Reds. Martinez spent that year in the minors as the Big Red Machine rolled to their second straight championship.

The final three years of his career were spent in Los Angeles, primarily as a reserve to the great Dodger infield of the 1970s. Martinez was a .280 hitter during his time in LA, 40 points higher than his career mark. Los Angeles twice went to the World Series during Martinez time with the Dodgers, but he did not appear in the postseason either year. In retirement, Martinez was a coach around the globe, most recently as a Dodgers representative in Taiwan as teams have expanded their search for major league talent.

Why I love this card
In addition to these cards, Saturday morning cartoons were a huge part of my childhood. Challenge of the Superfriends, Hong Kong Phooey, Scooby-Doo, Richie Rich, it was predictable where I was on Saturday's between 8 and 10 AM. One of my favorites was the Bugs Bunny & Road Runner Show. What does this have to do with Martinez? Part Bugs Bunny, part Wile E. Coyote. Remember, this is a nine year old mind at work here.

Something else....
This card would be the last card of Martinez's active career.
Posted by Dean Family at 10:34 PM