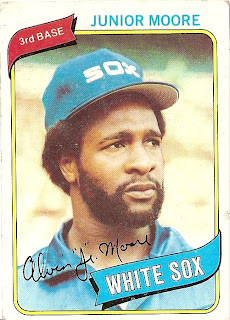 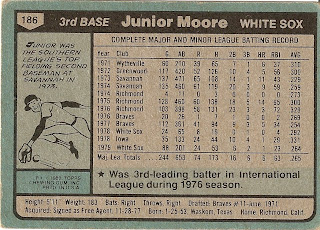 Who is this player?
Junior Moore, utility player, Chicago White Sox
On the final day of Spring Training in 1980, Junior Moore failed to make the Chicago White Sox roster and was optioned to Triple-A Iowa to begin the season. After a month, he was back in Chicago and given an opportunity to win the third base position. He performed well in his brief trial, batting .256 but was another victim of a numbers game in the White Sox infield and was again sent to the minors. He received another recall in September but played in only four games. 1980 would be the final season of his five year career.

Born Alvin Earl Moore, the righthanded hitting Junior was originally drafted by the Atlanta Braves in 1971. He began in the Braves chain as an outfielder but was eventually converted to an infielder as a faster path to the majors. A line drive hitter with good speed, Moore hit .300 in four of six minor league seasons and was a multiple-time minor league All-Star. He made his major league debut in 1976 when he was given a brief September look.

The following season, he earned the Braves starting third base job and he batted .260 with 5 home runs and 34 RBI. After his rookie year, a unique clause in his contract allowed him to leave the Braves and he signed on with the Chicago White Sox in November of 1977.

With the White Sox, he spent the next three years primarily as a utility player, appearing at six different positions. Moore was also a very popular player and manager in the Mexican minor leagues after completing his big league career. He later coached later coached college baseball at both Patten University in Oakland and Bethany College in Scotts Valley, California.

Why I love this card
I always liked the way that Moore signed "Jr." instead of the full "Junior." Looking at this card today, the look on Junior's face suggests that he knows his playing days are coming to an end. You don't often see a worried look on a major leaguer's baseball card, but I see it here.

Something else...
Moore was a client of Abdul-Jalil and Superstar Management, who negotiated his contract with Ted Turner with the Braves. His website is here, and you can read more about Junior's contract about halfway down the page.
Posted by Dean Family at 10:54 PM