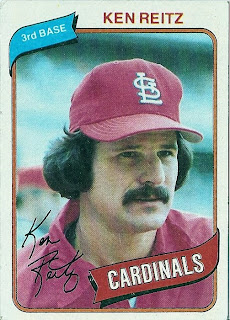 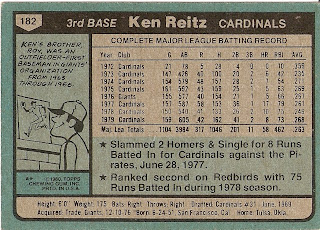 Who is this player?
Ken Reitz, third baseman, St. Louis Cardinals.
A slick-fielding defensive whiz, Ken Reitz set a record for third basemen in 1980 committing eight errors all season. He began the season at a torrid pace at the plate, among the league leaders in hitting and batting over .400 until the middle of May. Reitz earned his first All-Star selection that July and when Mike Schmidt was unable to start the game, Reitz took his place as the National League starter. His average cooled during the summer but he still finished a respectable .270. His days as a Cardinal were numbered when Whitey Herzog took over and he was traded to the Chicago Cubs in a package for relief ace Bruce Sutter in December.

Called "The Zamboni Machine," for his fielding prowess, Reitz was selected by the St. Louis Cardinals on the 31st round of the 1969 draft. He made his debut in 1972 and in his first two full seasons, he led all NL third basemen in fielding percentage (.974 in 1973 and '74), but the Gold Glove eluded him. He captured his first and only Gold Glove in 1975, curiously, the year he committed his most errors. With most of his career in the shadow of Schmidt, Reitz never received the recognition that his fielding deserved.

He was traded to the San Francisco Giants prior to the 1976 season but he only spent one season by the Bay and returned to the Cardinals in 1977. In addition to his glove, Reitz was also known for his slow foot speed. He was consistently among the league leaders in grounding into double plays and it was the primary reason that Whitey Herzog gave in trading him to the Chicago Cubs in 1981.

Reitz was a fan favorite in St. Louis. He was not a flashy hitter, but he was a consistent one, his hitting improving during his first few seasons. After batting .235 during his rookie season, he batted below .250 only once over the next seven. He was also known for his temper, he tore up a St. Louis airport after too many beers and too long a wait in 1979 and refused to show up to the Chicago Cubs after he was traded (he relented after the Cubs threw in $150K).

In Chicago, Reitz became addicted to amphetamines and it significantly reduced the length of his career. He was traded to the Pirates the following year and his 11-year career ended in 1982. He was accused of passing bad checks in the mid 1980s and played with the Senior Professional Baseball League. Today, he is part of the Celebrity Players Golf Tour and makes personal appearances on behalf of the Cardinals about 20 times a year.

Why I love this card
When the All Star Game rolled around and Reitz was named the starter, I scrambled to get this card. 1980 began my tradition of trying to get as many All Stars as possible to lay out during the game. In short, I overpayed for this card. It cost me a Carl Yastrzemski and Steve Kemp (remember I'm in Detroit) in one of my worst trades ever. But I didn't feel that way at the time.

Something else....
I've mentioned this before, but the Cardinals (and possibly the A's) have the prettiest looking cards in the 1980 set. The color combination with the pennants and the team's primary colors just make every one of the cards look good. It's a nice contrast to the browns, purples and oranges dotted here and there throughout the set.
Posted by Dean Family at 11:17 AM