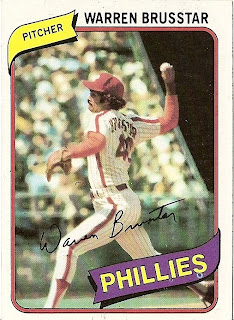 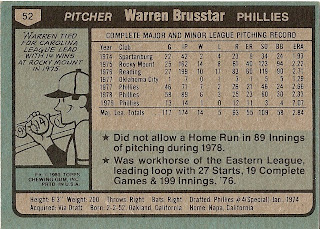 Who was this player?
Warren Brusstar, relief pitcher, Philadelphia Phillies
At his best, Brusstar was exactly the type of pitcher that every staff needs. While the term “setup man” was not widely circulated at that time, Brusstar fit the role with the Phillies, usually serving as the bridge to closer Tug McGraw. The 1979 season saw him miss much playing time with a sore shoulder, an injury that would reoccur in 1980 even as the Phillies would go on to win a World Championship.

Drafted three different times in three different years, Brusstar signed with the Phillies in 1974 after finishing his college career at California State University. He put together solid numbers as a starting pitcher in the minor leagues before eventually being converted to a relief pitcher. He made his debut with the Phillies early in 1977 and appeared in 46 games, winning seven and saving three as Philadelphia won the National League East. The following year, he appeared in 58 games notching a 2.33 ERA as the Phillies again won their division. Unfortunately, Philadelphia lost the NLCS both years to the Los Angeles Dodgers.

He started the 1980 season on the disabled list and made his debut that season in late July. His return helped solidify the bullpen as the Phillies again won the NL East. In the playoffs against Houston, Brusstar appeared in two games, and was the winning pitcher in the crucial fourth game. The Phillies would go on to win the NLCS and later the World Series against the Kansas City Royals.

Brusstar pitched the next few seasons with periodic arm troubles and in August 1982, he was sold to the Chicago White Sox. He only appeared in 10 games for the Sox, who dealt him to the Chicago Cubs when the season was over. In Chicago, he was healthy and pitched in at least 40 games every season, culminating with the Cubs 1984 NL East Championship. He set a Cubs record for relievers when he posted 32 2/3 consecutive scoreless innings in 1983. He was hit hard during the 1985 season, posting a 6.05 ERA and he did not make the team out of Spring Training in 1986, ending his 9 year major league career.

Today, Brusstar is the pitching coach for Napa Valley College. His wife Jennifer, took care of Warren’s teammate Tug McGraw as he was dying from cancer. She is the CEO of the Tug McGraw Foundation.

Why I love this card
The pinstriped Phillies unform is on full display. The large stripe is almost in perfect symmetry from Brusstar's shoulder to his knee. Does anybody wear the stirrups and sanitary socks anymore that Brusstar is sporting here?

Something else...
The pose in this photo is nearly identical to the one used in his 1986 Topps card. Either it was the same photographer or somebody at Topps was really lazy. Oh well, it's not as bad as his rookie card with the unibrow and protruding cheek
Posted by Dean Family at 10:44 AM