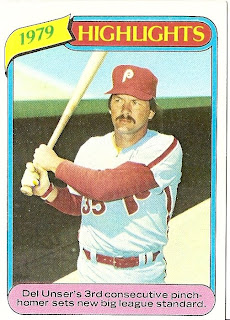 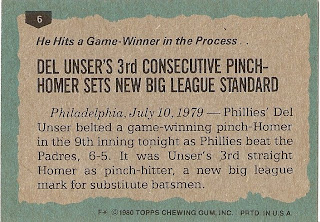 Who was this player?
Del Unser, pinch-hitter extraordinare of the Philadelphia Phillies. 1979 was Unser's transition year from an everyday player to a subsitute and he established a pinch-hitting record mentioned on this card. It happened in three times at bat He would be a hero of the 1980 Phillies World Champion team.

Why I love this card:
As I have already professed my love for the Phillies road unis of this period (see card #4 Pete Rose), you have to love that pinch-hitters are featured prominantly in 2 of the first 6 cards of the set. Make it three if you count the McCovey card, who accomplished his highlight as a pinch hitter as well.

Something else.....
Unser is not alone in this record, although you would not get that by reading the card. Lee Lacy accomplished this same feat the year before (1978) yet did not get a card in the 1979 set.
Posted by Dean Family at 12:01 PM