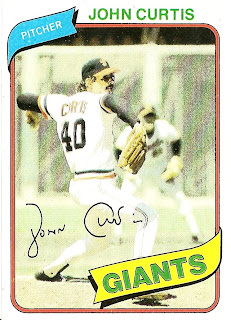 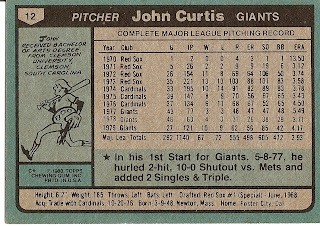 Who was this player?
John Curtis, pitcher, San Francisco Giants.
Curtis was forced into the Giants starting rotation in 1979 after injuries to other pitchers. He earned a spot in the rotation for the remainder of the year after some strong outings. He finished the year 10-9, the only Giants starter with a winning record. Curtis signed a 5-year, 1.8 million dollar deal with the San Diego Padres and figured to be part of their rotation in 1980.

As an amatuer, Curtis defeated the Cuban national team at the 1967 Pan-American Games and was drafted by the Red Sox one year later. He made his major league debut in 1970, and fit into the Red Sox staff, first as a reliever and then a starter.

During and after his baseball career, Curtis worked as an editor and freelance writer, and has been featured in Sports Illustrated. Also, he has been compiling information about a book on perfect games. Recently, he has been a pitching coach in the Brewers organization for the last six seasons.

Why I love this card
I always loved cards when you could somehow see the player's uniform number and Curtis' is on full display here. In a different time, it was another form of connection with a player when you could identify with his number. That and the awesome shot of the second baseman getting ready in the background.

Something else.....
Curtis is the first of 66 players in this set whose cards were double printed. This was not a uncommon practice employed by Topps in the late 1970s/early 1980s. Listed in most card price guides as "DP" this particular card was printed in more quantity than the average card. I have no insight as to how or why certain players were chosen for this "honor" but Curtis is the first in the 1980 set.
Posted by Dean Family at 9:51 PM