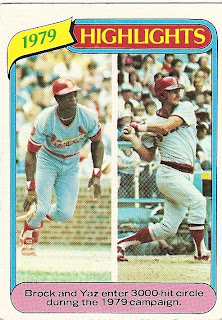 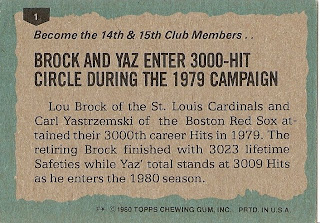 Who was this player?
Lou Brock and Carl Yastrzemski. Both gained admission to the 3000 hit club in 1979. Brock retired after the season, the all-time leader in stolen bases. Yaz would play four more seasons before retiring in 1983 with 3,419 hits. Brock would be elected to the Hall of Fame on his first try in 1985, Yaz would follow in 1989, also in his first year of eligibility.

Why I love this card:
You have to love a card that not only features two players but two Hall of Famers....in action! This card is the last issue of a Brock card as he did not receive a solo card in the 1980 set. Also, this picture of Yaz is from the 1978 season, the last year that the Red Sox would use the red batting helmet.

Something else....
Nice touch of having Brock at Wrigley Field in this card. Seeing that it was the team that he broke in with before being infamously traded for Ernie Broglio, it was a nice acknowledgement. Also, Brock got his 3000th hit against the Cubs (albeit in St. Louis). I doubt that much thought went into the selection of this particular photo though.....
Posted by Dean Family at 12:53 PM