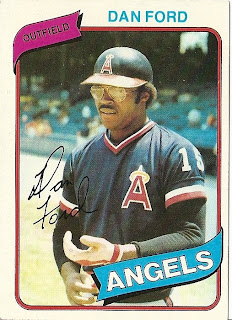 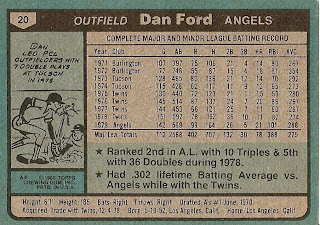 Who was this player?
"Disco" Dan Ford, right fielder, California Angels
Dan Ford was an important piece of the Angel team that won the American League West in 1979. He was the number three hitter in the Angels lineup and had 100 runs scored and 100 RBI. Ford hit for the cycle in 1979, only the second Angel ever to do so. Although he had surgery in November 1979, there were high expectations of Ford coming into 1980.

A product of the Watts section of Los Angeles, Ford used athletics to escape the divisive race problems happening in his neighborhood. He was originally drafted by the Oakland A's Charlie Finley in 1970, an owner known for an eye for talent. Unable to crack a loaded A's lineup that won three World Series, he was traded to the Minnesota Twins, where he made an immediate impact.

Playing in 130 games and hitting .280, Ford would have received Rookie of the Year consideration had it not been the same year Fred Lynn and Jim Rice both debuted for the Boston Red Sox. Ford never played in less than 140 games the next three seasons and established himself as a tough out in the Twins lineup. In 1976, Ford hit the first home run in the newly remodeled Yankee Stadium.

Sensing that Ford was due a increase in pay, miserly owner Calvin Griffith traded him to California instead of having Ford leave via free agenct. In Anaheim, Ford would replace the tragically deceased Lyman Bostock, ironically a former teammate.

Ford missed nearly all of spring training due to his knee surgery and got off to a terrible slump in 1980. He was hurt in mid-season and missed nearly two months and drove in only 26 runs. After the strike-shortened 1981 season, he was traded to the Baltimore Orioles for Doug DeCinces. Ford was an important part of the Orioles run to the 1983 World Series, hitting a home run in a Game 3 win off of Hall of Famer Steve Carlton. Ford retired two years later in 1985, ending an 11-year big league career.

Why I love this card
Where to start?
1. This photo was taken at Tiger Stadium in Detroit.
2. The navy blue warmups
3. The old style batting helmet, very similar to the souvenir plastic editions they sold at the ballpark.
4. The fact that the guy Ford was traded for, Ron Jackson is only a card away from him. Coincidence? I think not.

Something else....
How did the name "Disco" originate? From an interview on MLB.com:

The Twins' rookie of the year in '75, Ford quickly became popular on the field and in the Minneapolis social scene. A loyal fan following spawned, as did his nickname, "Disco" Dan Ford.

"I had some friends that owned a disco. We started the disco club out of there," he said. "We officially made it with some T-shirts and a trophy, and we brought it to the stadium. That's what made it really get going, 200-300 people had bought T-shirts and sat out in right field on occasions."