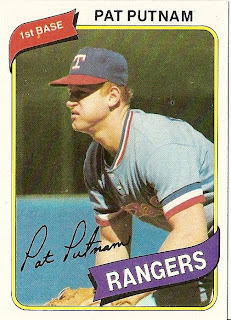 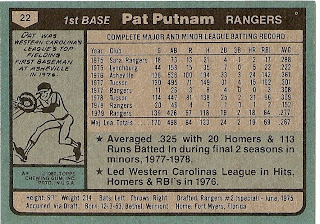 Who was this player?
Pat Putnam, first baseman, Texas Rangers
Coming off his first season as a starter, Putnam led the Rangers in home runs and slugging percentage and he was named AL Rookie Player of the Year by the Sporting News. In 1980, he was slated to be the Rangers everyday first baseman and one of the leading run producers on the team. Orioles manager and Hall of Famer Earl Weaver predicted that Putnam would be a future MVP.

After playing college ball at South Alabama for Eddie Stanky,, Putnam was a #1 draft choice of the Texas Rangers. He was a triple crown winner in the Western Carolina League and big league greatness was predicted for him at every minor league stop. However, he did have difficulty breaking into the Rangers lineup initially, due to the Rangers having several players who could play first base and DH.

He broke through to stay in 1979 and had another solid season for the Rangers in 1980. New Rangers manager Don Zimmer was a supporter of Putnam and believed in his potential, but he never became the RBI man that his manager envisioned. He lost his starting job in 1982 and was traded to the Seattle Mariners.

While in Seattle, he was given the opportunity to play every day and he took full advantage. He led the 1983 Mariners in home runs and RBIs and was named by his teammates as Mariner MVP. Despite a career year, he lost his job again in Seattle the following season, this time to eventual Rookie of the Year Alvin Davis. With the emergence of Ken Phelps as DH, Putnam was sold to the Minnesota Twins where he appeared in a handful of games before tearing ligaments in his fingers. His major league career ended 1984 after an 8 seasons.

Putnam spent a couple years in Japan and two more with the Senior Professional League before giving up professional baseball for good. Putnam resides in Fort Myers, his hometown of the last 35 years, where he owns a business called Home Environment Center, which specializes in air and water purification.

Why I love this card
Is it just me, or does Putnam look like Boog Powell? And a purple flag for the Rangers? With the solid red, white and aquablue of the Rangers road unis, purple just seems natural. But that's not what I love most about this card. Anytime you can get a shot of a big leaguer with a huge wad of chew in this cheek...hand me my stuff!

Something else...
In the June 7, 1980, The Sporting News stated that "Putnam belongs on any all-whacko list for his proclivities of eating dog biscuits, imitating Shamu the Whale in the whirlpool and assorted other eccentricities."
Posted by Dean Family at 9:50 AM