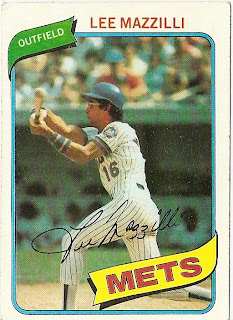 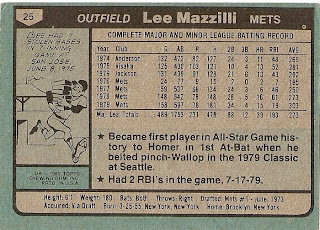 Who was this player?
Lee Mazzilli, centerfielder (soon to be first baseman), New York Mets.
In the long tradition of great New York centerfielders, in 1979-80 Lee Mazzilli of the New York Mets was heralded as the next Big Apple superstar. The Brooklyn-born "Maz" drove in the tying and winning runs in the 1979 All Star game and was the Mets best player. He was being moved to first base for the 1980 primarily because the Mets were a weak team and because of Mazzilli's weak throwing arm.

While in the minor leagues, Mazzilli set a California League record when he stole seven bases for Visalia on June 8, 1975. He became the Mets regular center fielder in 1977 and began to improve his numbers every season. In 1980, he had his best statistical season, leading the Mets with 162 hits, 31 doubles, 16 home runs, 76 RBI, 82 runs, and 41 stolen bases.

After being hampered by injuries in 1981, Mazzilli was traded to the Texas Rangers for pitchers Ron Darling and Walt Terrell. He played only 58 games with Texas and was traded to the Yankees for Bucky Dent midway through the 1982 season. Prior to the 1983 season, he was traded to the Pirates, where I spent three and a half seasons as a part time player. After he was released by the Pirates in July, 1986, I re-signed with the Mets, and was an important part of their 1986 World Championship team. His career with the Mets continued until 1989 when he was claimed by the Blue Jays on waivers. He retired after the 1989 season, his 14th in the Major Leagues.

After his career, he was the first base coach with the New York Yankees and was manager of the Baltimore Orioles in 2004 and 2005. Recently, he is the studio analyst for SportsNet New York.

Why I love this card
A nice game action shot where a clear shot of Mazzilli is shown, even though he looks a little like John Lennon. Love the wristbands that Maz is sporting here too. The Mets best pitcher and player in 1980 are both featured in the first 25 cards of the set.

Something else....
After his career, Mazzilli took up acting for a spell, starring in Tony & Tina's Wedding. Apparently, Dan Lauria (the dad from the Wonder Years) is a friend and talked Mazzilli into this. Now we know who to thank.
Posted by Dean Family at 6:37 AM