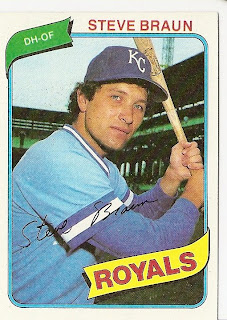 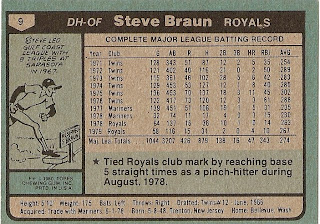 Who was this player?
Steve Braun, utility player, Kansas City Royals. In 1980, Braun was entering his 10th season as a major league player. Braun broke in with the Minnesota Twins in 1971 and established himself as a useful utility-man, playing five different positions. He became the Twins starting third baseman in 1973 and moved to left field in 1974. In 1975, he finished 11th in the American League in batting when he finished with a .302 average.

He became an original member of the Seattle Mariners when he was selected in the expansion draft for the 1977 season. He was traded to Kansas City in the early part of 1978 and played in the ALCS for the Royals against the New York Yankees. Braun was unable to crack a loaded Royals lineup in his time in Kansas City and he was released during the 1980 season. He was signed by Toronto shortly thereafter.

In 1981, he signed with the St. Louis Cardinals where he would spend the remainder of his career. He played a key role as pinch hitting specialist for the 1982 World Champion Cardinals. In Game 7 his hit and RBI extended the Cardinals lead to clinch the first St. Louis championship since 1967. He would appear in a second World Series in 1985, against his old team, Kansas City. He would retire after that series after 15 seasons in the bigs.

Why I love this card
First, this is the first American Leaguer to receive a solo card in the 1980 set. Second, the pinch-hitter theme continues with the appearance of Braun. Mota, Unser, Lum and now Braun. Four of only 18 players in history to have more than 100 pinch hits in their career, and they are featured in the first nine cards of the set. Nice touch.

Something else.....
Today, Braun runs his own baseball academy in New Jersey.
Posted by Dean Family at 1:36 PM