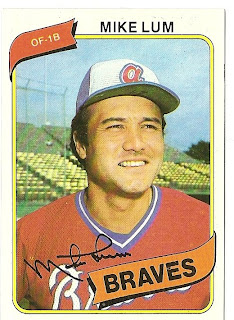 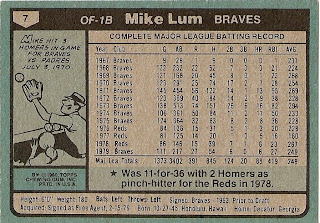 Who was this player?
One of just 35 players in Major League history to be born in Hawaii, Mike Lum played 15 seasons, all of them in the National League. Lum was originally signed out of high school by the Milwaukee Braves. He also had a football scholarship to Brigham Young, but that was before the NCAA allowed an athlete to be a pro in one sport and compete in college as an amateur in another. He made his major league debut in 1967.

While in Atlanta, Lum played for the National League West champion Atlanta Braves in 1969 and appeared in the NLCS against the "Miracle" Mets. A career highlight came in 1970 when he hit three home runs in one game. His best season came in 1973, where he achieved career highs in nearly every offensive category. After the 1975 season he was traded to the Cincinnati Reds and was a member of the World Championship team in 1976.

In 1980, Lum was coming off a season that saw him split time between first base and pinch-hitting duties. However, the arrival of Chris Chambliss in Atlanta would see Lum's playing time diminish and he was most often used as a pinch batter. Lum would be traded the next season and spend a year in Japan (1982) before finally retiring.

After his playing days, Lum spent two years in the late 1980s as Kansas City's hitting instructor. He began a long association with the White Sox organization in 1990, eventually becoming hitting coordinator for player development for all minor-league teams.

Why I love this card
First, the "pinch-hitter theme" in the opening cards of the 1980 set continues with the appearance of Lum on the first regular issue card.
Second, the banner going across his chest almost completely covers the word "Braves" on the front of his jersey, yet it almost looks natural.

Something else.....
Lum is a member of the Hawaii Sports Hall of Fame. He was a member of the Class of 2001 with Lenn Sakata. I don't really have to add anything else to underscore how awesome that is.
Posted by Dean Family at 4:22 PM