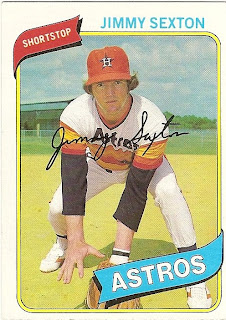 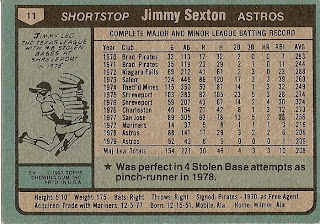 Who is this player?
Jimmy Sexton, shortstop, Houston Astros.
Sexton was a little-used backup during his time in the Major Leagues. He didn't make the Astros roster coming out of spring training in 1980 and did not appear in a major league game during that season.

It was with the Astros where Sexton would log most of his action. However, a low batting average and less than stellar fielding percentage limited his playing time. After spending all of 1980 in the minors, he was traded to the Oakland A's, and he appeared in just seven games in 1981. While he had his best year at the plate with Oakland in 1982, he was still unable to land an everyday assignment. He signed on as a late-season free agent with the Cardinals in 1983 to end his brief career.

Why I love this card
Any chance to see the rainbow Astros jersey and orange hats is a good one. However, Sexton appears to be taking the handoff from center more than he would be fielding a ground ball.

Something else.....
Love seeing all of the minor league stops on the back of this card; Niagra Falls, Bradenton, Charleston, San Jose....In 1980, you didn't regularly get this kind of information and it was always interesting to see.
Posted by Dean Family at 9:50 PM