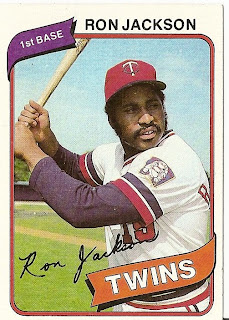 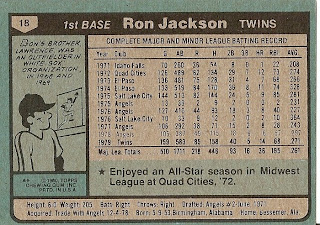 Who was this player?
Ron Jackson, first baseman, Minnesota Twins
Ron was coming off his first season in Minnesota, where he replaced future Hall of Famer Rod Carew. Appearing in 159 games that season, Jackson entered 1980 with personal highs in nearly every offensive category. His .9943 fielding percentage at first base also broke Carew’s Twins’ record.

Originally drafted by the California Angels, Jackson played six different positions with the Angels, demonstrating his versatility. After hitting .297 in 1978, Jackson spoke out against management regarding his salary and playing time. He found himself traded to the Twins that winter for outfielder Dan Ford.

Jackson would never again attain the offensive levels he did in his first season as Carew's replacement. In 1981, he was traded to the Tigers and hit well in his brief stay. The Tigers wanted to keep Jackson, but he chose not to re-sign with Detroit and instead tested the free agent market. He returned to California, primarily (and ironically) as Carew's backup, and hit .331 in helping the Angels win the AL West. Ron would retire a few years later to wrap up a 10-year career.

After his playing days, Ron's expertise was sought by several major league clubs. His experience under Gene Mauch, Sparky Anderson and Dick Williams served him well in roles as the Brewers minor league hitting coordinator and White Sox hitting instructor. In 2004, now nicknamed "Papa Jack" he was the hitting coach for the World Champion Red Sox and was very active in the local community. Currently he is the batting coach with the Round Rock Express a Houston Astros minor league affiliate.

Why I love this card
I love that the Twins logo patch is predominately displayed on Jackson's shoulder. The Twins have embraced the retro -look and the patch has been part of it. Also, Jackson's signature has changed over the years - and for the better I may add.

Something else....
While with the Angels, Ron also achieved the distinction of becoming one of the only players to wear his entire name on the back of his uniform. The Angels also had Reggie Jackson at the time, and apparently, this was to eliminate the confusion.
Posted by Dean Family at 9:29 PM