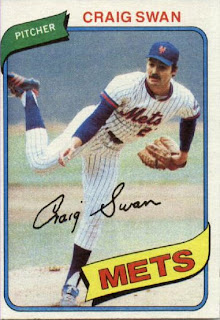 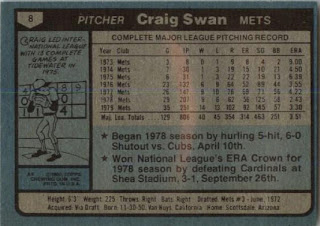 Who was this player?
Craig Swan, starting pitcher for the New York Mets. When this card was printed, he was a National League ERA champ (in 1978 for a team that lost 96 games) and was coming off his most productive season. Indeed, he was one of the brightest spots in an inglorious era of Mets baseball. Consider in 1979, he finished with a winning record (14-13) for a team that lost 99 games. He more than doubled his next closest teammate in wins and won 22% of the Mets game that season. Swan was considered a rising star.

A torn rotator cuff in 1980 and a strange 1981 injury limited his playing time significantly. He became one of the first major league pitchers to return from a rotator cuff in 1982 with a strong comeback year. He hurt his arm again in early 1983 and started the transition to relief pitching. In early 1984, he was released by the Mets but caught on with the Angels, where he finished his 12 year career at the end of the season.

Swan's own arm injuries led him to study anatomy at the Rolf Institute in Colorado and led him to open his own practice in Connecticut.

Why I love this card
The facimile autograph of Swan looks as if someone tried their best to copy Swan's signature on the card themselves. Consider Swan's autograph:

Now compare that to the card. It looks as if someone didn't want their parents to see their report card.

Something else....
OK, OK, here is some more information about Rolfing. I didn't know either.
Posted by Dean Family at 8:36 AM