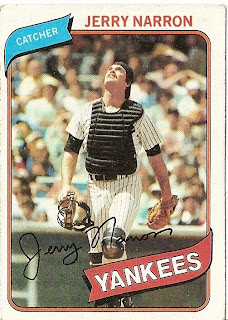 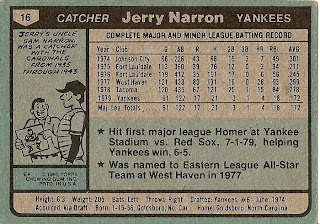 Who was this player?
Jerry Narron, reserve catcher, New York Yankees.
Narron made the roster of the defending World Champion Yankees out of spring training in 1979 as backup to Thurman Munson. When Munson died tragically in a plane crash mid-season, Narron saw more playing time. He was traded to the Seattle Mariners shortly after the season ended, where he would spend 1980.

Narron is the first player in the 1980 set that would become a future MLB manager. He served with the Texas Rangers in 2001-02 and the Cincinnati Reds 2005-07. Narron's playing career would last eight seasons, serving mostly as a backup catcher for the Yankees, Mariners and Angels.

Since retiring as a player, Narron has had a lengthy career as minor league manager and major league coach. Prior to his managerial positions with the Rangers and Reds, he served under Johnny Oates as a coach with the Orioles and Rangers. When Oates had to step down after being diagnosed with cancer, Narron replaced him.

Narron managerial tenure in Cincinnati was largely viewed as being the result of a poor pitching staff and he was let go before the end of the 2007 season. He returned to the Rangers on a part-time basis in 2008 as a front office consultant to Nolan Ryan.

Why I love this card
It looks as if Narron is watching a plane fly by in this picture. Perhaps one with a banner that he is trying to read. Regardless, if that is a pop fly he is watching, it doesn't seem as if Narron is planning to raise his glove or toss his mask. Also, finally a color scheme that matches in one of these cards: the color of the players name, the border around the picture, and the flag with the team name are all in sync.

Something else....
Narron's uncle, Sam played in the majors, and his son Connor, is considered one of the best high school players in the country.
Posted by Dean Family at 12:45 PM