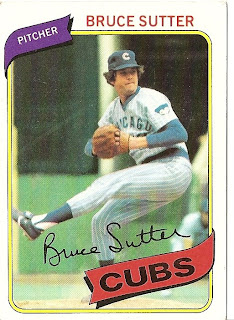 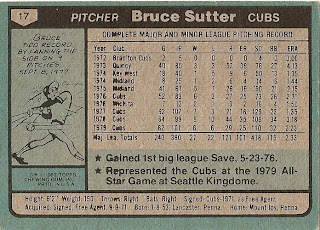 Who was this player?
Bruce Sutter, bullpen ace, Chicago Cubs. Hall of Famer, Class of 2006. At the time of this card's printing, Sutter was the reigning National League Cy Young Award winner and was the winning pitcher for the NL in the previous two All-Star Games. He was arguably the most dominant reliever in baseball at the time.

Sutter learned the split-fingered fastball in the minors, the pitch that made him into a dominant closer and Hall of Famer. A six-time All-Star and three-time Rolaids Relief Man of the Year winner, he led the league in saves five times. He was traded to St. Louis in 1981 and he was on the mound when the Cardinals clinch the World Series in 1982.

He left St. Louis in 1985 via free agency and went to the Atlanta Braves. At the time, he signed the largest contract in history. However, a series of injuries conspired to limit his effectiveness and eventually end his career. A brief return to form in 1988 was a final moment in the sun before his retirement in 1988.

In all, Sutter has had three shoulder surgeries, three knee surgeries, an elbow operation, and two back operations.

The sudden end to Sutter's career left his Hall of Fame candidacy in question for several years, until voters finally recognized his accomplishments and voted him in 2006. He was the first pitcher ever inducted that never started a game in his career. That same year, he also had his number retired by the St. Louis Cardinals, the team depicted on his cap in his Hall of Fame plaque.

Why I love this card
In addition to this being the first Hall of Famer featured in a regular-issue card, this card contains virtually no mention of his role as a premier relief pitcher. Saves are not listed on the statistics section on the back and there isn't even a mention of his Cy Young win. Even then, Sutter (and relievers in general) found it hard to get respect. Finally, Sutter is pictured here without his trademark beard.

Something else....
As mentioned on the cartoon on this card, on September 8, 1977, Sutter struck out three Montreal Expos (Ellis Valentine, Gary Carter, and Larry Parrish) on nine pitches in the ninth inning. This marks the 21st time in major league history that a pitcher had struck out the side on nine pitches. Sutter had also struck out the side (though not on nine pitches) upon entering the game in the eighth inning, giving him six consecutive strikeouts, tying the NL record for a reliever. Sutter earned the win when the Cubs won in the 10th inning.
Posted by Dean Family at 12:46 PM