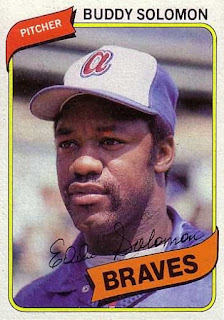 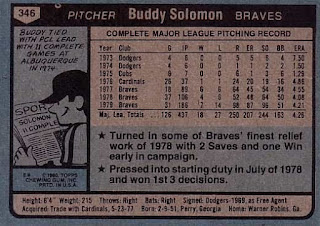 Who is player?
Buddy Solomon, starting pitcher, Atlanta Braves
As preparation for the 1980 season got underway, Buddy Solomon was looking to claim a spot in the the Atlanta Braves' starting rotation. Despite Atlanta's acquisition of Doyle Alexander, Solomon pitched well enough in August 1979 for a bad Braves team to earn consideration. However, an incident in Spring Training led to his trade to the Pittsburgh Pirates before the season got underway. He initially pitched out of the bullpen before his performance earned him starting assignments. The hard throwing right hander reverted back to his given name of Eddie and won seven games for the defending world champions. The highlight of the season was his back-to-back complete game victories in August, keeping the club in contention.

Buddy J. Eddie. Kingfish. Eddie Solomon, Jr. answered to all of these during his ten-year major league career with six different teams. A product of Perry, Georgia, Solomon was signed by the Los Angeles Dodgers as a minor league free agent in 1969. In a very deep Dodger system at that time, Solomon played for one of the greatest minor league teams in recent memory, the 1972 Albuquerque Dukes. During his minor league tenure, Eddie would follow a strong season with an inconsistent one, but his blazing fastball was his greatest asset that earned him an initial look from the parent club in 1974.

He joined Los Angeles for the stretch drive in 1974 and even made a postseason appearance in the National League Championship Series. However, Solomon was unable to stick in the majors for long and was traded to the Cubs and then the Cardinals for the 1975 and 1976 seasons. Eddie was pitching in the minor leagues almost as much as the majors.

Solomon was rescued from the bush leagues by the Atlanta Braves in 1977, pitching solidly, if not unspectacularly, as a starter during the second half of the season. The following year, he was moved to the bullpen where he found a groove, at one point not allowing a run in five straight appearances and posting a 0.90 ERA by mid-May. Injuries and lack of depth moved Eddie back to the starting rotation and he was poised to stay there for 1979. Eddie achieved career highs in '79 in strikeouts, games started and innings pitched and was considered the #2 man (behind Phil Niekro) at the end of the season.

Eddie posted another solid outing in 1981, winning eight games in the strike-shortened season and leading the Pirates in ERA. When he struggled to open the 1982 season, however, the Bucs traded him to the Chicago White Sox where he pitched in his final six major league contests. He returned to the minors in 1983 with the New York Yankees chain in attempt to come back but was unable to.

Solomon retired to his native Georgia and for a while sold cars after his playing days. Sadly, he was involved in a one-car accident and killed on January 12, 1986.

Why I love this card
I distinctly recall being puzzled by Buddy/Eddie Solomon's card. The front and the back say "Buddy" but the signature says "Eddie." Having no background information about his multiple monikers, I was convinced for a time that I had an error card. The trade to the Pirates didn't help as some of the 1981 cards (Topps, Fleer, Donruss) weren't consistent with the names either. It probably took me a couple of seasons to figure out the they were the same guy.

Something else....
Solomon is the second player on this blog to have died in a car accident. The other was Aurelio Lopez, who died in 1992.
Posted by Dean Family at 9:43 PM