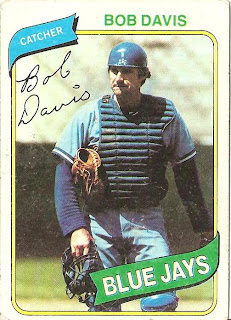 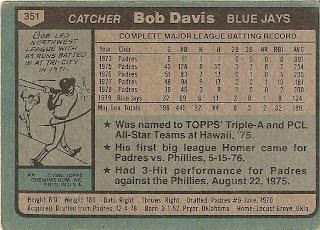 Who is this player?
Bob Davis, reserve catcher, Toronto Blue Jays
When the Toronto Blue Jays decided to trade starting catcher Rick Cerone to the New York Yankees prior to the 1980 season, it directly impacted Bob Davis' major league career. With Ernie Whitt promoted to starting receiver, Davis was his understudy. Toronto was in the early days of its franchise and Bob was given an opportunity to play; one that he took advantage of with career highs in nearly every offensive category. Although not a strong major league hitter, he was considered a good defensive catcher. Despite this, the Blue Jays released him in December.

An Oklahoma native, Bob Davis starred at Locust Grove High School before moving on to Claremore Junior College. He was discovered there by the San Diego Padres who made him their 6th round draft pick in the 1970 June amateur draft. Bob enjoyed success during his minor league career, leading the Northwest League in home runs and RBIs at Tri-City in 1971. He was given serious consideration in Spring Training 1973 and won the starting catching job for the Padres.

Although he was San Diego's Opening Day catcher, Bob's stay in the majors was short lived and was returned to the minor leagues after only five games. Despite periodic injuries that interrupted parts of some seasons, Davis was still able to put together an All-Star season at Triple-A Hawaii, batting .329 and leading the league in RBI. That strong showing brought him back to the major leagues, appearing in 43 games with San Diego in 1975.

Davis spent parts of the next four seasons in San Diego (1975-1978) earning his spot on the roster as a intelligent backstop and defensive asset. While his hitting may not have matched his defense (he never batted higher than .234 during his Padre days), at that particular time offense wasn't as stressed at all positions (especially catcher and shortstop) as much as it is today.

After the 1978 season, Bob was a Rule 5 draftee, going to the Toronto Blue Jays. As a result, he spent the entire 1979 season with the Jays despite the fact that he batted only .124 in 89 at-bats. Additionally, the aforementioned Cerone and Whitt were ahead of Davis on the depth chart. After his Toronto release, Davis spend most of 1981 with the California Angels' Triple-A club at Salt Lake City. He was called up for one game late in the season and it would prove to be the final game of his eight year major league career.

Currently Bob Davis resides in Locust Grove, Oklahoma not far from a Little League Baseball stadium and complex named in his honor.

Why I love this card
Have you ever gotten the feeling that you were cheated when you received two cards in the same pack. Over the years, that has happened to me more often than I can remember. It happened to my son recently when he was opening a pack of the new Topps Stickers.

I have six 1980 Bob Davis cards. It wasn't double printed so I don't know why I have so many. Anyway, Bob Davis was the first player that ever doubled up for me in the same pack. Whenever I get that feeling when you see two of the same cards in one pack, I think of Bob Davis.