Disclaimer: This post has nothing to do with the 1980 Topps set, rather a remembrance of my father, who was the original inspiration for this blog. Periodically, I will break away from the 1980 set, to include these entries as a tribute to the man who started my card collection and my interest in the game.


It was one year ago today that Justin Verlander pitched his second career no-hitter.

Verlander had one of those seasons last year; he was the best pitcher in baseball in 2011. Locally, the no-hitter was a nice story because he was a Detroit Tiger.

History will show that was the day that Verlander pitched his second career no-hitter and was an unofficial turning point in the Tigers' season. Most don't recall that Verlander was 2-3 going into this game and the Tigers were under the .500 mark. It has been recognized that his performance in this game sparked the team and lead them to the American League playoffs.

But no matter what happens with Verlander for the remainder of his career, his May 7, 2011 no-hitter gave me memories that will last the rest of my life for reasons that have nothing to do with baseball.

At the time, my father was dying of emphysema at St. John's hospital in Detroit. He was in the middle of a three-week hospital stay and at this point was all but confined to his bed. I was visiting him that Saturday afternoon and talk eventually turned to his mortality. We mutually and silently decided that the break from such heavy talk would be the Tigers game. It was just starting and even though I knew different, it was almost as if I was nine years old again, watching the game on TV with my Dad; talking about baseball and him giving me guidance on life in general as he always did.

Verlander, meanwhile, was in the middle of a masterful performance, retiring every single batter he faced. We knew that it was bad luck to say the words "no-hitter" but it was still early in the game. Dad tired around the sixth inning despite what was transpiring and said he wanted to take a nap. I knew that my Mom would be coming soon, so we said our goodbyes for another day.

When I got home, Verlander was still at it. I told my son what was happening and we turned on the TV. The irony was not lost on me as now the roles were switched. Our excitement built as we got closer to the final out, but my mind couldn't help but think of my dual roles as father and son and how this great American pastime bridged three generations. It served as our common interest as well as our distractions, gave us something to rally around as well as serve as our reason to spend time with each other. After the game, Grandson talked to Grandpa on the phone about the game and they compared notes. In my heart, I knew instantly that it was one of those moments I should make note of. I smile even now recalling it.

Yes, Verlander's no-hitter was baseball history. Yes, it was one of the seminal moments of the Tigers 2011 season. But to me it will always mean so much more. For one afternoon, Justin Verlander gave me something special that had really, little to do with baseball. He will always simultaneously remind me of my Dad and my son and how important our relationships are. 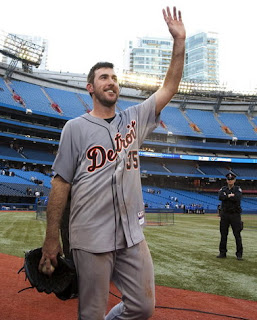