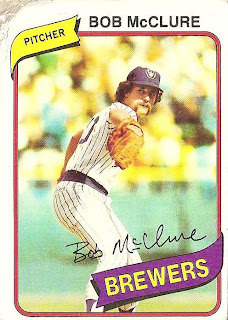 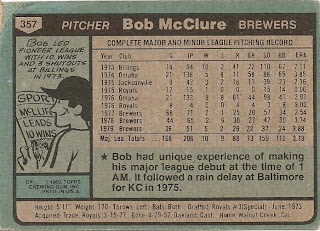 Who is this player?
Bob McClure, relief pitcher, Milwaukee Brewers
It is difficult to imagine now, but in 1980, when Bob McClure was was the de facto closer of the Milwaukee Brewers, he still hankered to be used as a starting pitcher. The Brewers were without a "fireman" in the traditional sense, McClure performed the best in that role, saving 10 games and posting an ERA below 3.00 for most of the season. With Milwaukee out of the race late in the season, the left-handed McClure was given an opportunity to start for the first time in his career. He pitched a complete game, six-hitter in defeating his old team, the Kansas City Royals. Bob won four of his five starts down the stretch, giving Milwaukee management new ideas about his versatility.

A three-sport athlete at Terra Nova High School in Pacifica, California, Bob McClure began to attract attention from major league scouts after being named All-American at San Mateo Junior College. He was selected by the Kansas City Royals in June 1973 and reported the Billings Mustangs of the Pioneer Rookie League. He led the loop with 10 wins and fired three shutouts. The following year, he was moved to Triple-A ball in Omaha and he picked off an astounding 17 enemy baserunners. By the end of the 1975 season, he was promoted to the major leagues and made his debut with the Royals.

The final month of the 1975 season was a fabulous one for McClure. In 15.1 innings covering 12 appearances, he did not allow a run. It was this performance that defined him as a relief pitcher in the major leagues. The Royals used him exclusively out of the bullpen, but he was moved quickly, traded to Milwaukee in a package deal that landed Kansas City catcher Darrell Porter. It was during this time that McClure established a reputation as a reliable reliever who was tough on left-handed batters. For example, Rod Carew and Fred Lynn, two stars of the era, batted only .227 and .240 respectively against McClure.

McClure led the Brewers twice in saves (1978 and 1980), but the acquisition of Rollie Fingers and Bob's performance as a starter had him moved to the starting rotation. However, tendinitis caused him to miss much of the 1981 season. He did pitch in three games in relief in the Brewers first ever post-season appearance, a ALDS loss to the New York Yankees in five games.

In Milwaukee's pennant-winning 1982 season, Bob was the #3 pitcher in the rotation and won a career high 12 games and 172 innings. He again pitched in the postseason for the Brewers, winning the clinching Game 5 in relief. Bob and the Brewers were not as fortunate in the World Series, however, as McClure lost two games in relief and Milwaukee the Series in seven games. Bob would spend 10 years in a Milwaukee uniform, and by the time of his departure in 1986, he was among the career leaders in several team pitching categories.

As the emphasis on relief pitching accelerated into the 1980s and 1990s, McClure settled into a role a left-handed specialist for several teams. Beginning with the Montreal Expos in 1986, he pitched with the New York Mets, California Angels, St. Louis Cardinals and Florida Marlins before he closed out his 19-year career in 1993.

McClure almost immediately transitioned into a coaching career after his playing days, in both the major and minor leagues. He was the Royals pitching coach for six seasons (2006-2011) where he oversaw the development of Cy Young winner Zack Grienke. He was named pitching coach of the Boston Red Sox for the 2012 season.

﻿Why I love this card
Quite possibly, McClure's card has the best fact on the back. To read that McClure made his major league debut at 1AM was stunning to me. At this point in my life, I don't think that I had ever stayed up later than 10PM. To think that major league baseball games were being played at such a late hour was beyond comprehension. Nobody was ever out that late were they? That was something that was reserved for Santa Claus or the Tooth Fairy. Or burglers. They were out late too. As I may have mentioned, mine was an odd childhood.

Something else....
McClure and Keith Hernandez were teammates in Little League. Even more importantly, this McClure card was a 1980 original from my collection.
Posted by Dean Family at 9:46 PM