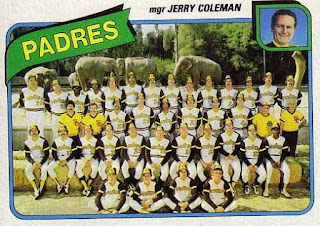 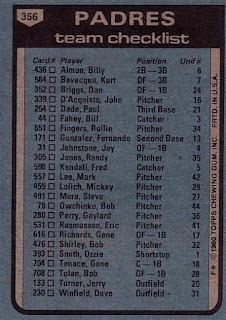 Certainly, whenever a team announces a new manager, there is excitement for the upcoming season. When Jerry Coleman was named as manager of the San Diego Padres on October, 1979, the word most associated with the decision was shock. In an unexpected move, Padres' GM Bob Fontaine fired manager Roger Craig and replaced him with Coleman, who at the time was the team's play-by-play announcer.

While Coleman had a nine year career with the New York Yankees championship teams of the 1950s, he had never before piloted a baseball team. Despite concerns about their depth, the Padres began the 1980 season optimistically after signing free agent pitchers Rick Wise and John Curtis to bolster the starting rotation and trading for nearly an entirely new infield in first baseman Willie Montanez, second baseman Dave Cash and third baseman Aurelio Rodriguez.

San Diego also had the talents of three future Hall of Famers on the squad (Ozzie Smith, Rollie Fingers and Dave Winfield). However, the Padres were beset by injuries and a lack of depth to finish 73-89 and a last place finish in the National League West.

The Winfield saga alone was one that hung over the Padres all season. Big Dave was in the final year of his contract and Padre management had hoped to resign him but talks stalled. It seemed clear as the year went on that the Padres best player would be moving on.

Predictably, Coleman's inexperience caused problems with several veterans who criticized him in the press, most notably Rollie Fingers and Gene Tenace. By mid-season Fontaine was fired and replaced by Jack McKeon.

However, there was some standout performances on the 1980 Padres, including:

Leftfielder Gene Richards, who finished second in the NL with 193 hits and stole 61 bases. Rightfielder Winfield, who was the club's lone All Star representative and led the club in HR and RBI, Centerfielder Jerry Mumphrey, who batted .298 and stole 52 bases, and Shortstop Ozzie Smith who set a major league record  for most assists by a shortstop (621).

The Padres set a team record and led the National League with 287 stolen bases, led by Richards, Mumphrey and Smith (57 SB).

At season's end, the Padres lost Winfield via free agency and "Trader Jack" McKeon earned his reputation by dealing most of their veterans including Fingers, Tenace, Bob Shirley and Randy Jones. In return, they would receive catcher Terry Kennedy among others, who would be one of the cornerstones of the 1984 National League champions. Coleman was fired as manager and returned to the broadcast booth, his one year adventure in the dugout over.

Why I love this card
This one is fairly obvious. The fact that there are elephants in a major league team's picture is pretty awesome. Taken at the San Diego Zoo, the elephants detract from the Padres horrible home unis.

Something else....
Former Padre pitcher John Curtis wrote a review about Jerry Coleman's book, which can be found here.

Coleman incidentally, has led a very intriguing life. In addition to being named the 1948 AL Rookie of the Year, he won four world titles as a player and was named an All-Star. He was also 2008 Hall of Fame broadcaster inductee, with more than 50 years of broadcast experience. Coleman also served in the armed forces in World War II and the Korean conflict. While a Marine Corps aviator he flew 120 combat missions, receiving numerous honors and medals including two Distinguished Flying Crosses.
Posted by Dean Family at 10:03 PM