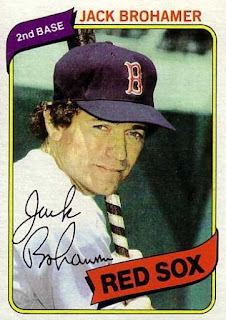 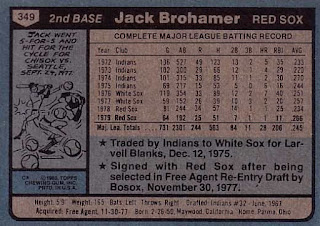 Who is this player?
Jack Brohamer, reserve infielder, Boston Red Sox
Beginning the 1980 season with the Red Sox, Jack Brohamer came off the bench frequently to spell second baseman Jerry Remy and third baseman Butch Hobson. He performed very well in this role, beginning with three multi-hit games in mid-April. His batting average was well over .300 when the Red Sox decided to sell him to the Cleveland Indians. With Duane Kuiper out for the season with an injury, Brohamer was given a everyday opportunity. He struggled at the plate with the Tribe as his batting average hovered around the Mendoza-line for most of the summer. A late flurry in September, along with his only home run that year, resulted in a final mark of .251.

The words "scrappy" and "hustle" are often used to described Jack Brohamer's style of play. A native of Maywood, California, he began his professional career as a 34th round draft pick of the Cleveland Indians in 1967. The left-handed Brohamer doubled in a run in his first at-bat in the minors and showed promise that first season by batting .291. Two years later he would lead his minor league in fielding percentage and assists. However, when he was benched at Wichita in 1971, he considered retiring and taking a job doing mechanical work. Jack changed his mind when he began playing regularly and eventually led him to the major leagues.

An impressive Spring Training won him a starting position with the Indians. Playing every day, Brohamer appeared in a career-high 136 games and earned a position on the Topps/Baseball Digest All-Rookie team. Brohamer would be the Tribe's regular second baseman for three seasons, until an injury forced him from the lineup. When Duane Kuiper played well in his absences, the Indians relegated Jack to the bench, eventually leading to his trade from the team. Understandably, this turn of events didn't sit very well with Brohamer, who wanted to play every day.

Traded to the Chicago White Sox for the 1976 season, Brohamer again played everyday for the Pale Hose, batting .251 and reaching career highs in home runs (7) and RBI (40). Bill Veeck's gamble the following season sent Brohamer to the bench again. With the White Sox trading for eventual free agents Richie Zisk and Oscar Gamble, outfielder Jorge Orta was moved to second base, displacing Brohamer. Nonetheless, Jack made the most of his appearances as he hit for the cycle against the Seattle Mariners. It was a memorable summer in Chicago as the White Sox were in contention most of the summer before falling from the race. A memorable image of Brohamer came on Opening Day, as the White Sox played the inaugural game in Toronto. Using bats and catcher's shin guards, the image Brohamer "skiing" made newspapers across the country.

Like several of his fellow "South Side Hit Men" Brohamer left Chicago as a free agent and signed with the Boston Red Sox. Under the premise that he would be Boston's starting second baseman, Brohamer was again sent to the bench when the Red Sox traded for Jerry Remy. Undeterred, Brohamer proved to be a valuable utility man, filling in at second and third base.

Following his return to Cleveland in 1980, Brohamer was looking for more playing time in 1981. When it didn't appear it would come his way, he requested a trade, preferably to a team near his California home. When that didn't happen either, Brohamer retired outright and took a job in his family's sheet-metal business. An update on his present whereabouts would be most appreciated.

Why I love this card
There has been a pretty nice run of cartoons on the last few cards and Brohamer's is no exception, mentioning him hitting for the cycle. However, what struck me most about this card is the barber pole/candy cane look of Brohamer's bat. I cannot recall when or where I have seen something similar, although I remember taping the heck out of my Cesar Cedeno model when I cracked the handle (ah, the days before aluminum bats!)

Something else....
An Indian fan was able to connect Jack Brohamer to Omar Vizquel and how the two were "traded" for each other. A bit of a reach, but entertaining nonetheless.
Posted by Dean Family at 9:36 PM