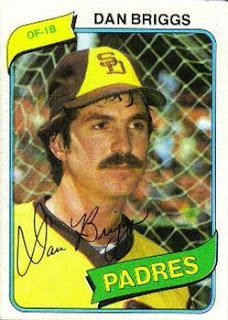 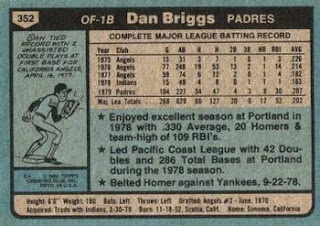 On the final day of Spring Training 1980, Dan Briggs was informed that he would be starting the season at the Montreal Expos' Triple-A club at Denver. Traded to Montreal from the San Diego Padres after the 1979 season, the left-handed hitting Briggs joined a Denver Bears squad that would be ranked as one of the best minor league teams of all-time. The Bears won 92 games and Dan was named an American Association All-Star. He finished the season batting .317 with 13 home runs and 74 RBI. With the Expos in a pennant race for the NL East flag, Briggs was not called up to the parent club and did not appear in a major league game in 1980.

A prep star at Sonoma Valley high school in Sonoma, California, Dan Briggs had an impressive amateur pedigree. He was named to the Topps All-American High School team in his senior year of 1970 and was also named San Francisco Bay Area Player of the Year. This would culminate in his selection by the California Angels on the 34th round of the 1970 June draft.

Dan began to build an impressive minor league resume, first gathering attention with a .300 season in 1973 and following that with a .352 performance at Double-A El Paso. Moved to Triple-A Salt Lake City in 1975, Briggs was putting in another solid .300+ season when he got the call from Anaheim and made his major league debut late in the 1975 season. He spent the final month of the season with the Halos, mainly as a first baseman.

He would split the 1976 season between Anaheim and Salt Lake City. He appeared in 77 games with the Angels as a first baseman and centerfielder, batting .214 and driving in 14 runs in 248 at-bats. He would begin the 1977 season with the Angels, but his struggles at the plate saw him split time again with the minor leagues. With the Angels moving in the direction of buying high profile free agents, Briggs became expendable and he was traded tot the Cleveland Indians.

Briggs spent the majority of the 1978 season at Triple-A Portland, putting together a fabulous season that saw him bat .330 with 20 home runs and 109 RBI. As his 1980 card indicates above, he also led the league in doubles and total bases. He played for the Indians the final month of the season, but he was on the move again, this time to the San Diego Padres.

In San Diego, Dan received his most extensive playing time at the major league level, although it was acknowledged that he played much of the season in pain and batted only .207. Dan was unable to crack a loaded Montreal lineup and he appeared in only six games for them at the major league level despite leading the American Association with 110 RBI. He was traded again after 1981, this time to the Chicago Cubs. He played in 48 games for the Cubs in 1982, the final season of his seven year major league career.

Briggs would play two seasons (1982-1983) in Japan before returing to the States with the Columbus Clippers in the New York Yankees organization. Despite two years in Columbus, he was not called up to the Yankees and he retired after the 1985 season.

Why I love this card
In prior posts, I have mentioned that animation was just as much at the center of my universe as these baseball cards. Whether it was the Sunday comics, Saturday morning cartoons or comic books, these were just as important. Spider-Man was a always a favorite and the netting behind Briggs here always reminded me of one of the webs that was so prevalent in the comics. Here was what I was thinking of:

Something else....
As Briggs is an alumnus of Sonoma Valley High, also too is former major leaguer John Henry Johnson, featured on Topps card #173.
Posted by Dean Family at 9:57 PM