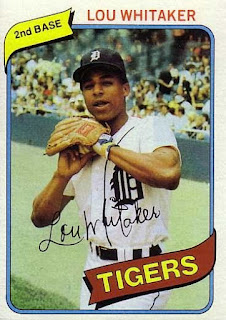 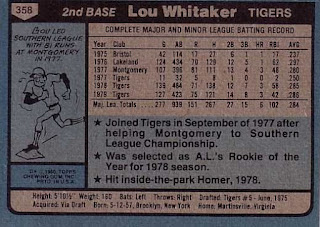 Who is this player?
Lou Whitaker, second baseman, Detroit Tigers
After the trade of Ron LeFlore, Sparky Anderson tabbed second baseman Lou Whitaker to be the Detroit Tigers' leadoff batter. Whitaker had difficulty adjusting to the role and slumped badly. He was moved to the ninth position in the order when his average dropped under .200 in early June and the chants of "Loooo" at Tiger Stadium turned into boos. The slump and vision problems kept in out of the lineup for two weeks and he was momentarily replaced in the hearts of fans by Stan Papi. This bothered the normally affable Whitaker who displayed his frustration by hinting at a trade. "Sweet Lou" had modest improvement for the remainder of the season, but his 1980 season was clearly the most disappointing of his career to that point.

Louis Rodman Whitaker was born in Brooklyn, New York but raised in Martinsville, Virgina where he had some success in high school initially as a pitcher. As an 18-year old high school senior, he was selected by the Tigers in the June 1975 amateur draft. The left-hand hitting Whitaker played third base for Lakeland in 1976, earning Most Valuable Player honors. The following year he was promoted to Montgomery, Alabama, where he was switched to second base to team with Alan Trammell. The two would spend the next 19 years as double play teammates. After a solid season with Montgomery, both Whitaker and Trammell made their major league debuts and got their first hits in the same game on September 9, 1977.

The following season, Whitaker broke camp with the Tigers and won the second base job outright before April ended. That first year he demonstrated excellence in the field, a quick bat and speed on tha basepaths. At season’s end, Lou finished the season batting .285 with 71 runs scored and led the league in double plays with Trammell. Whitaker was named American League Rookie of the Year, edging out future Hall of Famer Paul Molitor. Another solid season followed in 1979 and the Tigers, in part because of Whitaker, was considered one of the best young teams in baseball.

After a 1980 setback, Lou settled into the bottom of the Detroit batting order and slowly rebuilt his confidence at the plate. By mid-1982, the Tigers, and Whitaker in particular were ready to rise to prominence. Now moved to the leadoff position, Whitaker had arguably his best statistical season in 1983, banging out 206 hits and finishing third in the American League with .320 batting average. He was named an All-Star and won a Gold Glove for the first time in his career. The Tigers meanwhile, won the most games since winning the World Championship in 1968 and great things seemed to be on the horizon.

Whitaker was the catalyst for the 1984 World Series champions and although it appeared that his statistics did not match the previous year, he started his first All Star Game, provided excellent defense and clutch hitting and saved his best for the postseason. That fall, Whitaker showed the nation his skills as a leadoff batter, reaching base six times in the first inning of the Tigers' eight postseason games. He was also a tremendous fan favorite in Detroit, receiving thunderous ovations of "Looooo" on each trip to the plate. His popularity transcended Detroit, as he even appeared on an episode of "Magnum P.I."

For the remainder of the decade, Whitaker was one of the premier second basemen in the game. During one of his All-Star appearances, he forgot to pack his uniform and had to make due with a substitute that is now in the Smithsonian Museum. His power numbers peaked during the middle and late 1980s, averaging 20 home runs a season from 1985-1991. In 1987 the Tigers returned to the postseason, as Lou set a career-high with 110 runs scored. However, Detroit lost the ALCS to the Minnesota Twins. The Tigers contended late into the 1988 season, when an ill-fated dance move cost Whitaker the remainder of the season and the Tigers an opportunity at the post-season.

Whitaker has periodically returned to Detroit for special appearances and even served as a Spring Training instructor at Alan Trammell request when Tram managed the Tigers in 2003.

Why I love this card
A great shot of Whitaker at Tiger Stadium, apparently during pregame warmups. As a kid growing up in the Detroit area in 1980, all Tiger cards were special, but getting a Whitaker was like having a second birthday.

Something else....
Two things actually, Whitaker became a Jehovah's Witness midway during his career; introduced to the religion by teammate Chet Lemon. As part of these beliefs, Lou would not stand for the national anthem. I found a video of this here:

Secondly, it boggles my mind that Whitaker was not seriously considered for the Hall of Fame. He did nearly everything a middle infielder from his era could do, with the exception of being named MVP. His numbers are very similar to contemporary Ryne Sandberg, who did win the MVP. It is a shame that he is so overlooked.
Posted by Dean Family at 10:11 PM