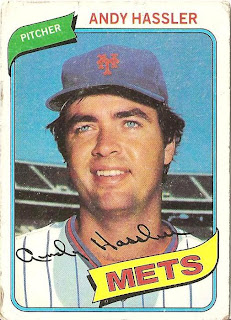 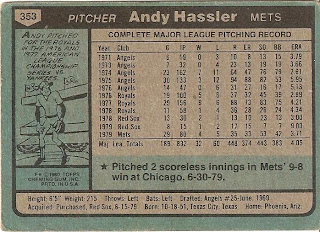 Who is this player?
Andy Hassler, relief pitcher, New York Mets
When Spring Training began in February 1980, it was presumed that free agent signee Andy Hassler would replace the departed Bruce Kison on the world champion Pittsburgh Pirates' pitching staff. However, a terrible performance the Grapefruit League shook the confidence of Pirate management. He performance, along the with acquisition of Buddy Solomon, likely would have led to his release if not for his large contract. Hassler appeared in only six games for the Pirates before he was sold to the California Angels in mid-June. Back in Anaheim for the second time in his career, the left-handed Hassler became the Halos most reliable relief pitcher and eventual closer. He saved 10 games and recorded a 2.49 ERA in an Angels uniform and re-established himself as an effective reliever.

A prep star at Palo Verde High School in Tuscon, Arizona, Andy Hassler once struck out 19 of 21 batters in a game and made the All-City team in his senior year of 1969. Shortly after graduation he was drafted by the California Angels, and less than two years later, he made his major league debut at Yankee Stadium. At 19 years old, Hassler was (and is) the youngest pitcher ever to start a game at the venerable ballpark.  Hassler lasted a month on the Angels in 1971 before he was sent back to the bushes for more seasoning.

The Angels were very high on Hassler, and he was the staff ace at Triple-A Salt Lake City. As the Angels added Nolan Ryan and Frank Tanana to their major league roster, the Angels envisioned a dominant rotation that included Hassler that would lead them for the remainder of the decade. Despite such promise, however, Hassler was unable to reach the same level of success as his All-Star teammates. Whether it was mechanical issues, poor run support or just bad luck, Hassler won only 10 of 30 decisions in his first five seasons in an Angel uniform and at one point lost eighteen decisions in a row.

Sold to the Kansas City Royals in June, 1976, Hassler's arrival in Kaycee coincided with a Royals run that saw them win three consecutive AL West flags. With renewed confidence and the help of a hypnotist, Andy solidified that back end of the Royals' rotation. In the postseason, the Royals and Hassler struggled as they were turned back by the New York Yankees. Despite his success in Kansas City, a freak injury sidelined him early in the 1978 season when he cut his hand reaching for suitcase (he instead grabbed a knife). When Rich Gale did well in his absences, Hassler was sold again in 1978, this time to the Boston Red Sox.

Hassler finished the 1978 season with Boston pitching mostly out of the bullpen. When he started poorly in 1979, Andy was sold a third time, to the New York Mets. With the pitching-poor Mets, Hassler pitched well, alternately as a starter and reliever. After the season, he signed a free agent contract, rumored to be $750K with the Pittsburgh Pirates

Back with the Angels from 1980-1983, Hassler was now pitching exclusively in relief. He was typically used as a left-handed setup man, during a time before that role was defined as it is today. Andy had an exception 1982 campaign as the Angels won the 1982 AL West title. Appearing in 54 games he won two, saved four and marked an impressive 2.78 ERA. The season ended on a sour note when the Angles lost the ALCS to Milwaukee and there was a minor controversy as to why manager Gene Mauch failed to use Hassler in the deciding game. After this, and an unimpressive performance the following season (0-5 5.45) Andy released. He latched on to the St. Louis Cardinals, where he spent the final two seasons of his 14-year major league career.

Today, Hassler is living in Arizona, enjoying his retirement. He dabbled in real estate after his playing days and is known to reply to his fan mail.

Why I love this card
I was a naive kid in 1980. I knew absolutely nothing about Topps' airbrushing policy and how or why they did it. But I knew it when I saw it and it leaped out at me on Hassler's card. There was just something about his Mets hat that just didn't look right. Looking back now, however, I just can't believe that Topps would waste their time airbrushing when Hassler was in a Mets' uniform for the whole second half of the 1979 season. I mean, they sent someone out to take a picture of Dock Ellis in a Mets uniform, who came on board roughly the same time. Couldn't they have taken the time to find Hassler and snap a photo?

Something else....
Hassler holds an unofficial record for players in the modern era, sold four times. You just don't see that happen today, let alone four times to one player.