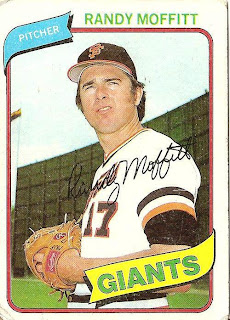 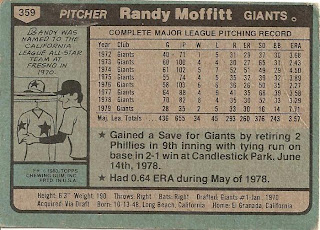 Who is this player?
Randy Moffitt, relief pitcher, San Francisco Giants
After spending most of the 1970s as one of the San Francisco Giants' most reliable relief pitchers, Randy Moffitt entered 1980 battling a mysterious ailment. He had lost nearly 25 pounds since the start of the 1979 season and doctors had been telling him that it was all in his head. Others thought that his arm simply went dead. He went through frequent bouts of vomiting, bleeding ulcers and had difficulties with his stamina. However, Randy was found to be suffering from a rare and frequently fatal intestinal parasite, Cryptosporidia enteritis.  Only 100 humans are known ever to have contracted this lethal disease which is typically found in barnyard animals. Moffitt was told that, if he lived, it might take him two years to recover and was advised to rest and return for periodic tests. The Giants put him on the disabled list and he appeared in only 13 games in 1980.

Randy Moffitt came from an athletic family as his older sister was tennis star Billie Jean King. He was a prep star in Long Beach, California, winning the Connie Mack World Series. Randy was a two-time all league choice in three seasons at Long Beach State University where he set career records for innings pitched and strikeouts. The Giants made him their first pick of the 1970 amateur draft.

As a slider-sinker specialist, Randy's reputation was a ground ball pitcher. He also was known to deliver his pitches from a variety of angles, including sidearm. He was converted into a reliever after his first professional season and within two years he was in the major leagues. Moffitt quickly became the Giants' most reliable short reliever. In an era where saves are not as emphasized as much as today, he notched 54 in a four year stretch (1973-1976) that saw him place in the top ten in the league each season. For example, his fifteen saves in 1974 was second best in the National League.

He was also a very durable pitcher, averaging 61 appearance a season between 1973 and 1978. However, most of these achievements were done in anonymity as the value of a reliable late inning reliever would not be recognized often during Randy's career. By the time it began to, he began to fall ill with the fungus that would essentially cost him three seasons of his career. Moffitt, a horse enthusiast, surmised that he contracted the virus hot walking racing horses. At one time, he worked on the backstretch of Bay Meadows track near San Francisco and also earned a groom's licence.

While still on the disabled list during the 1981 season, the Giants released him, figuring his career was over. But he signed a minor-league deal with the Houston Astros and made a comeback with them late in the 1982 season. The Astros did not keep him as they were going towards younger players and he was recommended to the Toronto Blue Jays. He had a fine season with Toronto in 1983, appearing in 45 games and saving 10. Curiously, he did not appear again in a major league uniform after that season, ending his 12-year major league career.

Why I love this card
At the time, I loved the idea of an All-Star jersey like the one shown on the back of Moffitt's card, but I'm glad I changed my mind about that. I also had no idea about the Billy Jean King connection at the time, not that it would have mattered to me, though. In looking at this card today, and knowing what I know about what he went through during this period, he does look like he was ill when this picture was taken. However, I could say the same about alot of players who have made ugly faces elsewhere in this set.

Something else....
At the time of Randy Moffitt's release from the Giants in 1981, only two other pitchers in franchise history (Christy Mathewson and Carl Hubbell) appeared in more games than Moffitt. He has since been passed by Greg Minton and Gary Lavelle, but that is still impressive nonetheless. I definitely would have got the trivia question wrong.
Posted by Dean Family at 9:42 PM