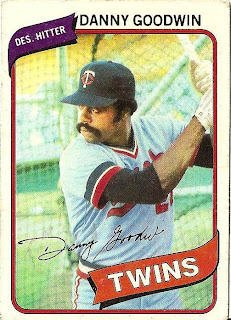 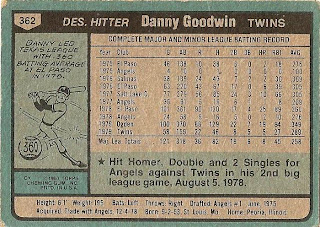 Who is this player?
Danny Goodwin, designated hitter, Minnesota Twins

While Danny Goodwin began the 1980 season as the Opening Day designated hitter, he started slowly with only one hit in his first four games. As would seem to be a consistent theme throughout his career, the Twins were not patient with Goodwin and he was relegated to the bench. Glenn Adams took his place as Minnesota's left-handed DH and Danny was unable to gather much momentum throughout the season. Even though he batted only .200 in 55 games, a highlight game on June 27 when he had the go-ahead single to defeat the Boston Red Sox.

The pride of Peoria, Illinois, Danny Goodwin is best known for being the only man to be taken with the first overall selection in the amateur draft on two separate occasions.  He crafted a stellar reputation at Peoria Central high school, clouting monstrous home runs while batting .488 in his senior year as a catcher. His number was retired even before his graduation and he was named Topps High School All American catcher. 20 scouts saw him in action, including the Chicago White Sox, who held the first pick in the 1971 draft. Predictably, the White Sox chose him even ahead of future All-Stars such as Frank Tanana, Rick Rhoden and Jim Rice.

However, even before his selection, Goodwin stressed education over athletics. The son of a government chemist and high school counselor, Danny demonstrated that he understood the value of a college education, especially in the times of the early 1970s. Goodwin even indicated that he may he interested in pursuing a degree in dentistry. Irregardless, Danny enrolled at Southern University in Louisiana and had success on the field and in the classroom. While he was named Collegiate Player of the Year is senior season, he also earned a degree in zoology.

With the California Angels now holding the top choice in 1975, Goodwin entered the draft even more credentialed than before.  In addition to his Player of the Year honors, Danny played on the 1974 Pan American world championship team and was named All World at catcher. Like the White Sox four years before, the Angels made him the top selection at $125,000 and he reported to Double-A El Paso. The Angels thought so much of him that he was called up to the parent club and made his major league debut on September 3, 1975, the day after his 22nd birthday.

After a quick ascent through the minor leagues in 1976, Goodwin was establishing himself as a major-league hitter, but a series of injuries to his arm hindered his progress behind the plate.  Despite impressive minor league numbers, it was difficult for Danny to find playing time in Anaheim. A little over three years after drafting him, the Angels traded Danny and Ron Jackson to the Minnesota Twins in exchange for Dan Ford.

In 1979, he split time between the Twins and Triple-A, he put up his best numbers and earned a spot on the Opening Day roster for the first time in 1980. However, limited playing time and struggles at the plate led to his release after the 1981 season. The Oakland A's signed him where he spent 17 games, the last of his seven year major league career.

Danny's baseball dreams were by no means over, however. Making the most of his assignment,  Goodwin performed well at Triple-A Tacoma, even being named the Tigers team MVP in both 1983  and 1984.  Unfortunately, it was not enough to earn a return ticket to the big leagues and Danny moved on to Japan for one final season in 1986.

Why I love this card
I have talked before about the first game I ever attended in July, 1979. Goodwin was one of the handful of players that signed an autograph for me, long before I really knew why that was important. But what stuck with me the most was not the signature but Goodwin's awesome mustache that he sports here

Something else....
In 1989, Goodwin was inducted into the Greater Peoria Hall of Fame and in 2011 was enshrined in the College Baseball Hall of Fame.
Posted by Dean Family at 4:10 PM