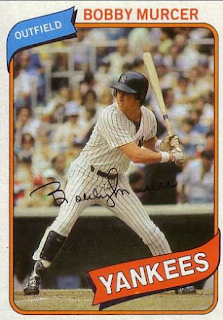 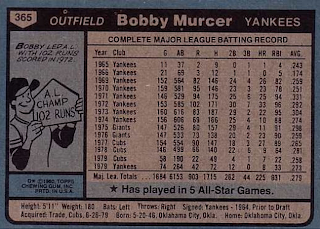 A popular fan favorite in the Bronx, the 1980 season was one of mixed emotions for Bobby Murcer. Part of a crowded Yankee outfield picture, a lack of consistent playing time initially frustrated Murcer. Coupled with the illness and passing of his father, Bobby was struggling, batting less than .200 as June began. He heated up with five home runs during the month including a dramatic home run against Oakland and a two-homer day against Cleveland. Bobby played an integral role in the number retirement ceremony of his friend, the late Thurman Munson in September and days later he celebrated the Yankees AL East championship. It was Murcer's first taste of the postseason, but he went 0-4 in a three game sweep of the Kansas City Royals.  The year ended with Murcer touring Japan with a major league All-Star team and opening a short-lived baseball academy in Florida.

The first is the Oklahoma kid, the heir apparent to Mickey Mantle in the Yankee legacy. Murcer idolized Mantle and achieved a thrill playing alongside him during the mid 1960s. After a stint in the army, he certainly delivered on much of this promise, hitting for power and average as the Yankees slowly started becoming a contender. A five-time All-Star, he was a legitimate MVP candidate, among the league leaders in several categories, leading the the league in on-base percentage in 1971 and runs in 1972. When Bobby clubbed four consecutive home runs in a double header against the Cleveland Indians in 1970, he was on his way to becoming a superstar in the media capital. Bobby appeared on Beat the Clock, Hee Haw and What's My Line (below). His trade to the San Francisco Giants for Bobby Bonds in 1975 was a shocker, but this was the Murcer National League fans were expecting. While he never did match his production with the Giants and later the Cubs, he was still a respected and dangerous bat.

The second phase came upon his return to the Yankees where he performed as a reserve outfielder and designated hitter. However, the most indelible image of Murcer, during this time, if not during his entire career where the events of Monday, August 6, 1979. Yankee captain and Murcer's friend Thurman Munson was being buried after a tragic plan crash. Murcer delivered the eulogy that afternoon and later that night hit a home runs a delivered the game winning hit on a nationally televised game against the Baltimore Orioles. This moment established Murcer as a Yankee legend, a elder statesman and leader in the clubhouse and on the field.

The final phase was as Yankee broadcaster, where he endeared himself to a new generation of Yankee fans. He was also instrumental in several causes, such as the Baseball Assistance Team and becoming an anti-tobacco advocate.

Murcer fought a courageous battle against cancer the final two years of his life, passing away on July 12, 2008. Earlier that year, his biography "Yankee For Life" was released. A moving and inspirational memoir, Murcer wrote with incredible determination, positivity and courage in the face of a deadly disease. It stands as a testament to what kind of human being Bobby Murcer was.

Why I love this card
I am not then, nor am I know a Yankee fan. I don't know why, but getting a Murcer card was different. He was from a different era, played in the old Yankee Stadium with Mantle, Maris and Ford. I respected his longevity at that point but what really stood out was his shin guard. You really didn't see that often in 1980 and it jumped out at me. I played soccer and had shin guards like this and had no clue why Murcer would wear one. Just another source of endless childhood debate.

Something else....
In his autobiography, Murcer writes about his ill-fated baseball school. With big names such as Lou Piniella, Rick Cerone and Charlie Lau, the camp nonetheless underestimated expenses and failed to make money. There was one success story, future major league All Star Mike Stanley was a the most famous graduate, enjoying a 15-year major league career.
Posted by Dean Family at 10:29 AM