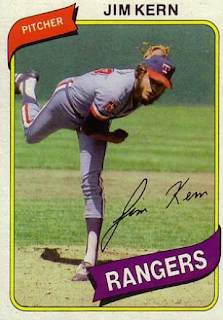 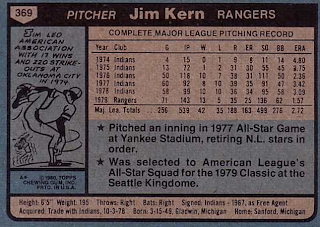 Who is this player?
Jim Kern, closer, Texas Rangers

If you opened a pack of cards during the 1980 season and got this Jim Kern, you had not yet heard the word "closer" yet associated with his position.  In an era where the role of relief specialist was still evolving, Kern had averaged 90 innings pitched a season and was making a strong case as one of the premier "firemen" of the day. Kern's heavy workload proved to be problematic in 1980.  Despite beginning the season in All-Star form, the hard throwing right hander struggled through elbow and then neck injuries. Perhaps the most bizarre occurrence came in August when Kern was hit in the mouth on a return throw from catcher Jim Sundberg. Apparently, Kern was looking into the crowd when the throw struck him in the mouth, knocking him off the mound resulting in a concussion, temporary amnesia and nine stitches in his mouth. Kern struggles were widely seen, perhaps unfairly, as a major reason for the poor performance of the Rangers in 1980.

Growing up in Gladwin, Michigan,  the natural environment of his hometown led a young Jim Kern to be as passionate about the great outdoors just as much as the National Pastime. His path to the majors began in 1967 when he was drafted by the Cleveland Indians with a brief exception in 1969 due to military duty. He would spend seven years in the minor leagues, getting a chance at the majors after going. 17-7 for a 1974 Oklahoma City team that finished 22 games under .500.  That would lead to his major league debut near the end of the 1974 season.

The Indians of the 1970s were not a good team, but by 1976, there was reason for optimism. Led by many young players, including Kern and under manager Frank Robinson, it appeared that the Indians fortunes could be changing. However, poor management in the dawn of the free agent era led to things never quite coming together in Cleveland and Kern saw his way to Texas, traded for Bobby Bonds despite two straight All Star appearances in 1977 and 1978. Kern famously summed up his time in Cleveland with an all-time zinger:


The first thing they do in Cleveland, if you have talent, is trade you for three guys who don't.

In Arlington, there was much optimism as the season began as Kern was poised to team with Sparky Lyle in the Rangers bullpen. Indeed, Kern responded with the best season of his career. Appearing in 71 games, Jim won 13, saved an additional 29 and posted a miniscule ERA of 1.57. The 29 saves was the second-best mark in the American League and he finished fourth in the AL Cy Young voting and won the 1979 Rolaids Relief Man of the Year award. He also played an instrumental role in that year’s All Star Game, allowing an eighth inning, game-tying home run to the Mets’ Lee Mazzilli in what was the first pinch-hit home run in All Star history. The NL would win the game 7-6 with Kern taking the loss.

After an injury-plagued 1980, Kern worked out three hours a day six days a week in the off-season, running, exercising, lifting weights, and reported to camp carrying 17 extra pounds of muscle. He told the press:  "I'm in the best shape I've been in since I was with the Marine Corps at Parris Island in '69." Despite this promising start, injuries and the 1981 Players Strike limited Kern that season, although he pitched very well in a limited role. The Rangers, meanwhile, traded Kern to the Mets in the offseason and before he ever suited up, flipped him in a deal to the Reds that netted New York George Foster.

Kern pitched well in Cincinnati, but the team played poorly, prompting public criticism by club officials. This didn’t sit well with the self-dubbed “Emu” and he challenged the Reds policy of no-facial hair. Consequently, he was dealt to the Chicago White Sox before the 1982 season was over. Injuries significantly limited his time in Chi-Town and by early 1984, Kern accused the Sox of ruining his arm during rehab from an injury. Kern was one of several pitchers of this era, who had they pitched today, would have been treated quite differently in regards to their injuries.

Over the last three years of his 13-year major league career, Kern would pitch with the Phillies, Brewers and return to the Indians in 1986. In one of his last games in the majors, with a bad Cleveland ballclub, fans directed their frustrations at him during one particularly ugly loss. Kern, in his irreverent style, tipped his hat to the crowd as he exited the field.

In retirement, he founded and continued to run The Emu Outfitting Company, consistent with his love for the outdoors. He also shares his passion for photography at http://www.jimkernphotography.com/


Why I love this card
Ok, I will admit that I love this card more now than I did then. Probably because Jim Kern reminds me of Tommy Benvenuti. Tommy was a year older than me, but he looked like he was four years older than me. Even had facial hair similar to Kern as an 11-year old. Ok, maybe not facial hair. But he threw hard, like Kern, and like the batter in the cartoon on the back of this card, scared me to death. I could totally related with the shivering in fear at the thought of getting plunked by an errant Tommy pitch and was comforted in the fact that maybe, just maybe, professional hitters felt the same way.

Something else…
The 1980 Texas Rangers, a popular pre-season selection for AL West Champions used 41 players during the season. 15 of them were an All-Star selection at one point or another during their career.
Posted by Dean Family at 6:25 AM