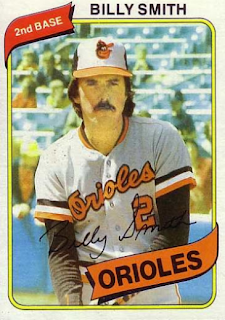 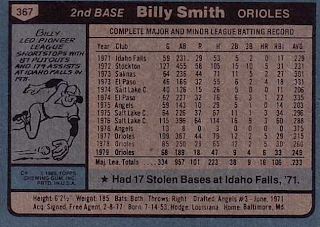 Who is this player?
Billy Smith, second baseman, Baltimore Orioles

Coming off a season as a reserve for the AL Champion Orioles, Billy Smith began the 1980 season looking for a raise in pay.  After a season where he posted career highs in home runs and RBI, Billy was looking to more than double his salary of  $47,000 at salary arbitration. In those early days of free agency and escalating salaries, negotiations were often times contentious. In what Smith called "the only thing I ever regretted," the arbitration hearing left Smith feeling unappreciated and he took his frustration to the media. He was quoted in the newspapers that if the Orioles didn't value his contributions, he wanted to be traded. His performance in Spring Training was effected and it left him vulnerable. Shortly before Opening Day, the Orioles cut him loose. He was without a job until mid June when he was signed by the Philadelphia Phillies. The Phils sent him to Triple-A Oklahoma City where he spent the remainder of the summer.

A fairly comprehensive biography on Billy Smith currently exists on the SABR website. There is great detail on his early life and prep career in San Antonio, his draft into Major League Baseball and his minor league days. Billy made his major league debut for the California Angels on April 13, 1975 as a pinch runner against the Chicago White Sox. Even though he was thrown out at the plate later that inning, he had a reputation as a speedy switch-hitter with a good glove. While he didn't hit for high average that first season, he appeared in 59 games, but errors in the field proved to he his undoing in Anaheim.

Billy appeared in only a handful of games the following year, spending the majority of the season in the minor leagues. His career took a turn for the better at the end of the season when he was signed by the Baltimore Orioles. Free agency had taken a toll on the Orioles and there was a opportunity for many young players, including Billy. He took full advantage in April 1977, earning him a starting position for a while and placing among the league leaders. A nice article about this time in Smith's career can be read here. He was a fan favorite with the O's, appearing on a local radio show as a weekly guest.

Billy spent the next two seasons in Baltimore, primarily as a reserve, and often times as a reserve for second baseman Rich Dauer. He earned national exposure during the 1979 postseason, appearing in four games during the World Series, collecting a couple of hits and scoring a run. Billy returned to the major leagues for his fifth and final season in 1981 as a member of the San Francisco Giants. He struggled with the bat, hitting only .180.

Shortly after his retirement, Smith was a witness in a drug conspiracy trial of his former agent. Testifying under immunity, Smith indicated that cocaine use was very prevalent among members of he 1979 Orioles and specifically named pitcher Don Stanhouse as a user.  Since his career ended, Billy worked in sales and owned his own roofing company. As of 2015, Billy was employed with a roofing wholesaler and participating in youth baseball clinics.

Why I love this card
As a young kid opening packs, some cards just jumped out. All Star cards of course were a natural. So where league leader cards and Hi-light cards. Checklists too, but for the wrong reasons. Sometimes though, your heart would race when you came across a card of a star player. For a millisecond, that happened with me and Billy Smith's card. Why? Because when I first saw this card, I thought it was of reigning Cy Young winner Mike Flanagan. I just thought they looked similar. Here's a side by side:

Something else....
At Jay High School in San Antonio Billy played on the same high school team as two other future major leaguers, Mickey and Rick Mahler.
Posted by Dean Family at 2:31 PM