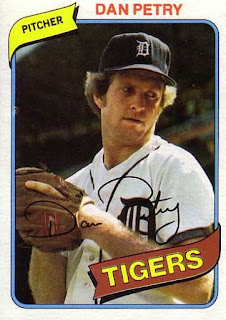 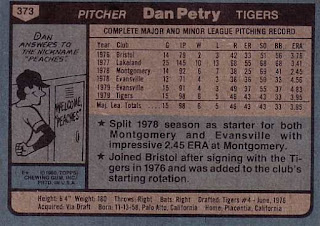 Who is this player?
Dan Petry, starting pitcher, Detroit Tigers

When Spring Training 1980 ended, Dan Petry was not on the Detroit Tigers roster as camp broke. It was not, however, due to Petry's performance, rather, the schedule. The first month of the season, off-days allowed manager Sparky Anderson to use a four-man rotation. Rather than have Petry sit out April in the Tiger bullpen, he was sent to Triple-A Evansville where he could get regular work. He was called up the first week in May and would go on to stay in the Tigers rotation for the next eight seasons.

There is a very comprehensive SABR biography of Petry that can be found here. Additionally, there is a 30-minute interview with Petry on Youtube that can be viewed here. Like many of his contemporaries, many modern-era ballplayers have had their histories extensively covered and/or blogged about and Petry is no exception. A couple of fast facts:

* Considered the #2 starter in the 1984 World Champion Detroit Tigers rotation. He was 18-8 that season, and finished 5th in the Cy Young voting. This comes a year after he won 19 games (a career high) and led the AL with 38 games started. His pitching coach Roger Craig claimed that Petry had the best slider in the American League and he came close to a no-hitter against the Cleveland Indians.

* Arm surgery in 1986 essentially ended his career as a top-tier starting pitcher. He was traded to the California Angels before the 1988 season. In the Detroit-area, there was some intrigue surrounding a May Tigers-Angels game as Jack Morris would be facing off against Petry. While it may have been an ordinary game on the schedule, it was exciting for Tiger fans who were treated to a pitching duel between the former teammates.

* He had an offer to extend his 13-year career in 1992 by playing in Italy, but he instead decided to retire. He worked for 16 years as a salesman and also with the Detroit Lions. Today, he appears often on Fox 2 Detroit for special events such as Opening Day and/or postseason appearances as an analyst. He also is an assistant baseball coach for his son Matt, who is the head baseball coach at Orchard Lake St. Mary in Orchard Lake Michigan. Another son, Jeff, is currently playing in the NHL with the Montreal Canadiens.

Why I love this card
Petry looks so young in this card. While he would later grow a mustache, and to me look much older, he was still very young during his best years and was 25 in 1984. While 25 may seem like an old man to a 10 year old collecting baseball cards, looking back it makes me shake my head.

Something else....
I met Dan Petry once at the Macomb Mall in Roseville, Michigan where he was making an appearance. I handed him this card (below) a 1986 over sized All Star card. It represented all the players named to the 1985 All Star Game. Being nervous and a dumb kid, I muttered something along the line of "sorry it wasn't the best of games for you." Petry walked the bases loaded in the game and gave up two runs. Rather brusquely, and rightfully so, Petry said "at least I was there." I didn't have any other response than "thank you" and moved on. I am still embarrassed about it to this day. 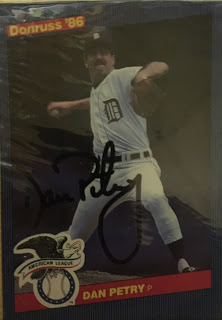 Oh, and one card separates Detroit Tiger teammates? Not sure what Topps was thinking in 1980 in terms of distribution but one card between Morris and Petry represents the shortest difference between teammates in the 1980 set.
Posted by Dean Family at 7:00 AM