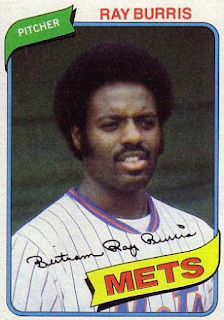 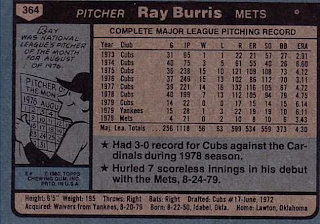 During a rebuilding period for the New York Mets, right-handed hurler Ray Burris was looked to provide veteran presence to the starting rotation as the 1980 season began. Ray pitched well to start the year, fashioning an ERA under 3.00 as spring turned into summer. Despite this, he had just a .500 W-L record on the morning of July 3, when he started a game against the Montreal Expos. In the second inning, he was trying to bunt Alex Trevino to third when the pitched from Charlie Lea hit him in the hand and broke his thumb. He spent a month on the disabled list and returned in dramatic fashion, defeating division front-runners Montreal and Pittsburgh Pirates in back-to-back starts. Burris lost his last six starts of the season unfortunately, but still led the team in starts and innings pitched.

Like many players of his era, Oklahoma native Ray Burris was a high school star at Duke High School and played semi-pro ball for the Lawton Oklahoma Pepsis. He helped lead his team to the 1970-71 championship and was named all-state both seasons. He enrolled at Southwestern Oklahoma State University, where he played basketball, earned four varsity letters on he diamond, and received a Bachelor of Arts degree in Recreational Leadership. He still holds most school career pitching records and in 1972 he set a NAIA record with 150 strikeouts in a season. His performance drew attention for the major leagues and the Cubs selected him in the 17th round of the 1972 free agent draft.

He ascended quickly in the minor leagues, and was invited to Spring Training by the Cubs in 1973. He made the staff as a relief pitcher but split times between the Chicago and the minor leagues his first two seasons. He was inserted into the starting rotation in 1975 and spent the next four seasons taking a regular turn on the hill for the Cubs. Highlights of Ray's tenure as a Cub include turning a 3-11 start in 1976 to go 12-2 the rest of the way to finish with a winning record and exceptional ERA. Ray was also on the mound at Shea Stadium the night of the 1977 New York blackout in July and Burris earned the complete game win two months later when the game was resumed.

When the 1979 season started slowly, Ray was shipped to the New York Yankees, where he only pitched in 14 games before being dealt again this time across town to the Mets. A free agent after the 1980 season Ray left New York for the Montreal Expos, who were looking for more pitching after they failed to land Don Sutton. Ray pitched very well in the strike-shortened '81 season, helping lead the Expos to their first and only post-season appearance. If not for Rick Monday, Ray would likely have been named MVP of the NLCS, besting rookie sensation Fernando Valenzuela with a complete game shutout over the Dodgers in Game Two and allowed only one run over eight innings in Game 5 before giving way to Steve Rogers and the impending Monday heroics.

Burris never pitched that well in Montreal again and was traded to he Oakland A's after the 1983 season. Rejuvenated by a change in scenery, Ray was the A's most reliable starting pitcher in 1984, leading the club in victories, innings, complete games and shutouts, while fashioning the best ERA of all Oakland starting pitchers. Despite this output he was traded to the Milwaukee Brewers for Don Sutton. He had a disappointing season in 1985, finishing with a losing record in his final season as a starting pitcher. Ray pitched for the Cardinals and Brewers his final two seasons, ending his 15 year career after the 1987 season.

After his playing days, Ray turned to the coaching ranks for several different teams and organizations, most recently in the Philadelphia Phillies chain with the Lehigh Valley Iron Pigs. He was considered a strong candidate to be the Phillies pitching coach under manager former Ryne Sandberg.

Why I love this card
Bertram Ray Burris. There was something magical about a player's full name. When I was a kid, whenever my full name was spoken, it usually meant that I was in trouble. To see a players full name spelled out in a similar fashion reminded me that they were human too. It gave them personality and commanded intrigue. A simple yet effective way to pull a young kid into the world of baseball and collecting.

Something else.....
One has to wonder when looking at a player like Ray Burris. With the exception of his three seasons in Montreal, Ray's entire career was with losing clubs. Particularly his time with the Cubs and Mets, what if a pitcher of Burris' talents was with say the Pirates and the Dodgers. I'm not suggesting that Burris would he a Hall of Fame candidate, but it is just one of those "what ifs" that are scattered across the history of this great game.
Posted by Dean Family at 11:39 AM