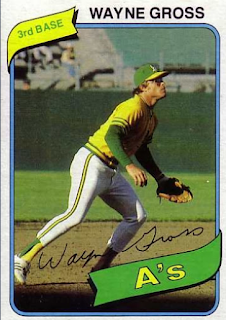 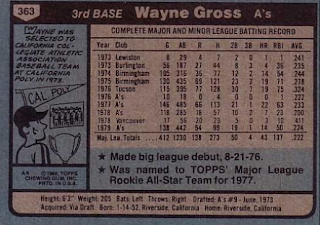 Who is this player?
Wayne Gross, third baseman, Oakland A's

When the 1980 season began, not much was expected from the Oakland A's. Fresh off of a 108-loss season, new manager Billy Martin inherited a young club with several talented players. One of these was players was third baseman Wayne Gross. Like several of the A's, Gross thrived under his new manager as Oakland was one of the surprises of the 1980 season.  He raised his batting average over 50 points for a career high .281 and stole five bases included one of home on May 3. Wayne even demonstrated some of his manager's legendary temper, when he was ejected from a game against the Angels and bumped umpire Jerry Neudecker. Gross finished the satisfying season improving on nearly every offensive category and having the best defensive season of his career to that point.

Wayne Gross was born in Riverside, California and was a prep star at Riverside Poly High, whose alumni includes former major leaguers Bobby Bonds and Gary Lucas as their alumni. Wayne attended Cal Poly State University where he played both baseball and football. In 1972, Gross was third in the nation in punting with a 42.1 average, was named All-Conference and All-American Honorable Mention. On the baseball diamond,  Wayne met his future wife at Cal Poly who was the team's official scorer.

Selected in the 9th round of the 1973 draft, Wayne was selected by the Oakland A's during the height of their dynasty and began a rapid rise through the minor leagues. He clubbed 52 home runs on his way up and was looked to be one of the replacements as Charlie Finley dismantled the five-time AL West champions. He made his major league debut late in the 1976 season, and earned a starting position as the A's third baseman.

Gross started off the 1977 season clubbing 15 home runs by mid-June and being among the league leaders in home runs and RBI. He was rewarded with a selection to the American League All Star team. He cooled off somewhat in the second half, but his 22 home runs represented nearly one-fifth of the A's team total. Wayne was still learning the defensive nuances of the position and led the league with 27 errors.

The following year was a bit of a struggle at the plate as he was sent to the minors to refine his batting stroke. He began wearing glasses and his power stroke returned. In 1979, he reclaimed his  hold on the position and steadily improved in the field. He started three triple plays, tying a major league record.  By 1980, Wayne established himself as a solid major league third baseman just as the A's we're ascending back to the AL West crown.

With the 1981 West champions, Wayne slumped at the plate during the regular season, but he still played a key role in the postseason. His three-run homer in Game 1 of the ALDS against the Royals help lead the was to a win and series sweep before the Yankees defeated the A's in the ALCS.

Wayne remained the A's third baseman until Oakland traded for Carney Lansford after the 1982 season.  He moved on to Baltimore for the 1984 campaign, becoming the regular third sacker for the defending World Champions. He responded with career highs in home runs and RBI. Injuries hampered him during the 1985 season and he returned to Oakland for three games, the final ones of his 11 year career.

In retirement, he coached his son Kyle's Little League team, helping them reach the Little League World Series in 1991. Kyle would go on to play ball in the Giants minor league chain. In 1994, he appeared as a pitcher in the movie Angels in the Outfield (below), a spot recommended by old friend and teammate Carney Lansford. Today, Wayne is enjoying retirement in Danville, California. 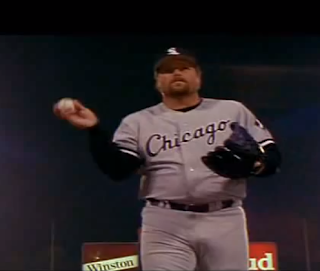 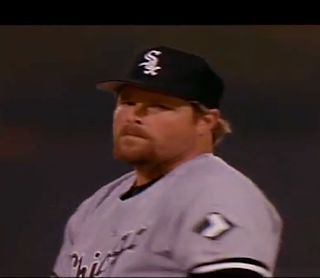 Why I love this card

Some shots just looked major league, and Wayne Gross' card here was one of those for me. Whether it was the action shot, the A's colorful uniforms or Gross' concentration on something other than the camera, this is what a major leaguer looked like in 1980. Bonus points go toward capturing the shadows and sunlight around the third base bag giving the A's banner a a natural accent.

Gross had a very curious 1985 season. In 103 games with the Orioles, he hit 11 home runs. Decent, if not unspectacular production. Curiously, he drove in only 18 runs despite those 11 dingers. That's 9 solo shots, and two three-run jobs. That's three RBI for the entire remainder of the season.