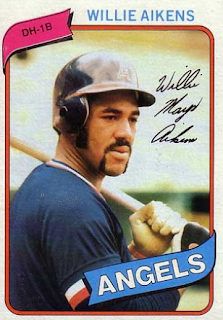 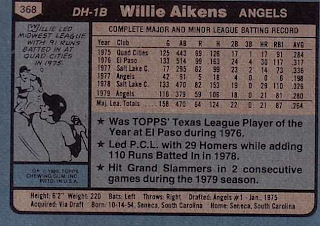 Who is this player?
Willie Aikens, first baseman, California Angels

During the summer of 1980, Willie Aikens was now a key member of the Kansas City Royals. As the Royals were on their way to another AL Western Division Championship and their first World Series appearance, Aikens was their left-handed slugging first baseman. In his second full season in the major leagues, the 25-year old crashed 20 home runs and plated 98 teammates while batting .278. It was in the postseason, however, where Aikens would make his greatest contribution. He batted .364 in the Royals' three game sweep of the New York Yankees in the ALCS, but made a bigger splash in the World Series, becoming the first player ever to hit two home runs in a World Series game twice, in Game 1 and Game 4. Behind the scenes, however, Aikens was at the beginning of a substance abuse problem that would evetually alter his life and career. He would admit to using cocaine after games, even World Series contests. But at that moment, the future looked bright for the World Series hero, unaware that what would unfold was still light years away as the 1980 season came to a close.

Today, Willie Mays Aikens is predominantly remembered for those World Series home runs and his long substance abuse issues and incarceration. His story is now about redemption, one that he tells in an autobiography, "Safe At Home."  However, there is much more to the man and the ballplayer.

Rather than write up the traditional player summary that has accompanied these posts, this can be best served by spending some time with this video currently on-line:

Why I love this card
Like most, it has to be the inclusion of his complete name. How can any kid not be infatuated with a player named Willie Mays Aikens. The questions were numerous. Are they related? Is he as good as his namesake? Regardless, it was a cool card to have.


Something else....
Aikens 1981 Topps card discussed the naming issue as well in the cartoon on the reverse: