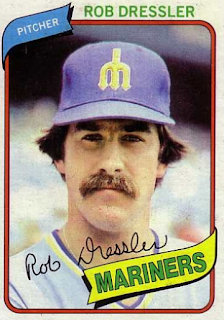 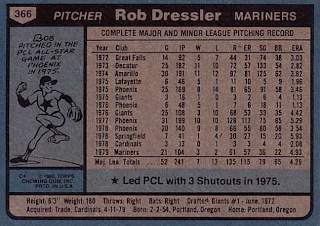 Who is this player?
Rob Dressler, pitcher, Seattle Mariners

For the first time in his career, Rob Dressler began the 1980 season on a major league roster. Slated for the Mariners bullpen, Rob was a right-handed control pitcher who most often depended on the ground ball outs. Early in the season, many of his appearances were typically in a mop up role, but for a team that lost 103 games that happened quite often. Add to the fact that the Mariners were second in the AL in errors, many of the ground balls that he was counting on did not become outs. Despite a bloated ERA, he replaced Mike Parrott in the Seattle rotation in late July, and actually did quite well. While he won only four games and lost six in 13 starts down the stretch, he crafted a 3.38 with a 1.189 WHIP and seven quality starts (even if those stats didn't exist in 1980). By the end of the season, he reached career highs in innings pitched, appearances, strikeouts and victories.

A Portland, Oregon native, Bressler was a graduate of Madison High School which also boasts All Star hurlers Rick Wise and Kent Bottenfield as alumni.  He was a first round selection of the San Francisco Giants in June 1972 and reported Great Falls of the Rookie League shortly after his graduation. It was then that Rob began the long odyssey throughout the minor leagues in pursuit if his major league dreams.

Decatur. Amarillo. Lafayette. Phoenix. Phoenix. Phoenix again. Phoenix for four seasons.  Yes, Rob did have a cup of coffee with the Giants in late 1975, and he spent a good chunk of the 1976 season in San Francisco, starting a career-high 19 games, with a 3-10 record and a 4.43 ERA. Somewhere along the line, however, the Giants lost confidence in him as he was relegated to the minor leagues for all of the 1977 and 1978 seasons and was traded to the St. Louis Cardinal organization in July, 1978. Rob was a starting pitcher for much of his minor league career and could be a streaky performer. He was also plagued by inconsistency.

In an interesting transaction, the Cardinals loaned him to the Seattle Mariners in 1979 and the pitching-starved expansion team found a spot for him at the major league level. Starting and relieving, Dressler finished the 1979 season with some good outings and a chance to make the 1980 staff. After his high-water marks in 1980, he pitched poorly in Spring Training 1981 and was released. He did not catch on with another organization and it was the end of his four year major league career.

Today, Rob Dressler still lives in the Oregon area although not much has been reported about his post-baseball career. Any information that can be shared as to his activities over the last 36 years would be most appreciated.

Why I love this card
The All Star uniform on the cartoon pitcher. It has that Bingo Long vibe going even if the pitcher looks more like he is auditioning for Dance Fever than deliver a pitch.

Something else....
In researching Dressler's 1980 season, I was really surprised that he was cut loose by the Mariners. Then as now, pitching was at a premium and at 26 years old, it appeared the Dressler found a groove in the latter part of the 1980 season. It didn't appear that he was injured or something drastic occurred. It is just puzzling that he was given up on so quickly.