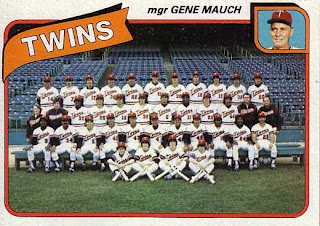 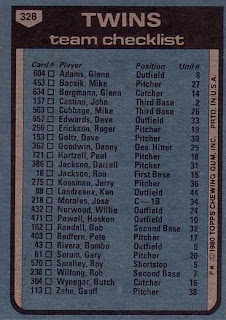 The Minnesota Twins were a surprising team in 1979, finishing over .500 despite losing several star players over the past couple of seasons. Although they were not seriously expected to contend in 1980, most observers believed that Minnesota's young talent should continue to develop.

As was their pattern, the Twins lost another key free agent over the off-season, this time Dave Goltz to the Los Angeles Dodgers. They finished April with a .500 record, but in the AL West at that time, it was good enough to be three games back. The Twinkies completely collapsed in May and never truly recovered. Their home attendance of 769,206 was the worst in the American League and the Twins had a net loss of $1 million dollars, at the time the deepest loss in club history.

Gene Mauch, pictured here, did not even finish the 1980 season, choosing to resign on August 24th. Johnny Goryl was named manager on an interim basis and he guided the Twins to a 12-game September winning streak that earned him the job for 1981. Minnesota finished the year at 77-84, a distant third, 19.5 games back of the Kansas City Royals.

Other highlights of the season included Ken Landreaux's 31-game hitting streak and selection to the American League All-Star team; Jerry Koosman finishing in the top 10 in victories for the second season in a row; and work beginning in earnest at the Twins' new ballpark, the Hubert H. Humphrey Metrodome.

For those of you who forgot the old Metropolitan Stadium, here it is again.

Why I love this card
I have mentioned previously about my first game and this Twins team was the one that I saw. One player that stood out for me was their relief ace Mike Marshall who completely mowed down the Tigers that night. Turns out that Mike Marshall didn't have a baseball card in 1980. Turns out that he didn't have a card in the 1978 or 1979 set either. No one really had cards older than that, so I found it odd that he didn't have a card. He is pictured here, on the sitting in the first row on the far right.

Something else....
Staying with the Marshall theme, he was the Twins player rep and an extremely vocal advocate for the Player's Association. Despite setting an American League record with 90 appearance in 1979 the Twins released him in June 1980. The official reason was his age and performance, but Marhsall contested the decision and won. He never returned to baseball, due to actions such as this. I just can't imagine something like this happening to say, Mariano Rivera.
Posted by Dean Family at 9:36 PM