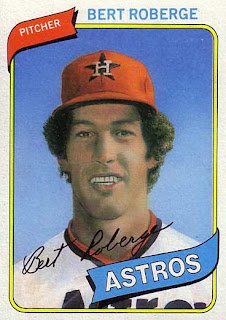 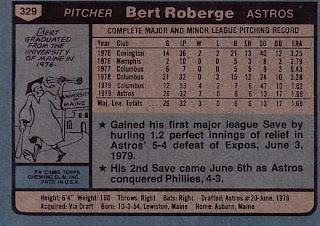 Who is this player?
Bert Roberge, relief pitcher, Houston Astros
One man's misfortune is another man's opportunity. Such was the case for Bert Roberge during the summer of 1980. He failed to make the Astros final cut in Spring Training and spent the first half of the season pitching out of the bullpen for the Tuscon Toros. When J.R. Richard had his unfortunate stroke that ultimately ended his career, Roberge got the call to replace him on the roster. Bert appeared in 14 games for the eventual NL West Champions, winning two games in relief.

A native of Lewiston, Maine, the righthanded throwing Roberge stayed in his home state and attended the University of Maine. He had dual dreams in those days, to be a major league and to be accepted into dental school. During his four years as a Black Bear, Bert set the school career ERA record (1.82) and is tied for the career shutouts mark (six). His collegiate performance drew the attention of the Houston Astros who drafted him on the fourteenth round in 1976. While he was accepted, dental school would have to wait.

Roberge made his major league debut in 1979 and spent most of the summer with the Astros as they challenged for their first NL West title. While the Astros fell a little short, Roberge pitched tremendously in 26 appearances. He fashioned a 1.69 ERA, winning three games and saving four more. A highlight of the season was back-to-back saves against the Giants in mid-season that helped Houston maintain it's lead in the NL West race.

It appeared the Roberge earned a spot in the Houston bullpen, but acquistion of Frank LaCorte and the signing of Nolan Ryan to the already pitching-rich Astros moved Roberge down the depth chart. Bert did not appear in the majors in 1981 but he returned to Houston in 1982, mostly in a long relief capacity. He again did not pitch in the major leagues in 1983 and he was granted free agency at the end of the season. Bert signed with the Chicago White Sox where he picthed well, if unspectacularly in middle relief.

He moved to Montreal in 1985 where he achieved career-highs in most picthing categories, including appearances and innings pitched. He struggled in 1986 and split time between the majors and minors for the third consecutive seasons. He retired from professional baseball at the end of the season after six major league seasons. Bert has since been recognized as one of Maine's greatest athletes and was part of the 1988 class of the Auburn-Lewiston (ME) Sports Hall of Fame.

Why I love this card
The cartoon on the reverse. Something about someone in their cap and gown with a diploma in one hand and a baseball bat in the other. Made everything seem so simple. For a nine-year old boy, the possibilities were limitless. By the way, is this card airbrushed? Roberge's hat looks strange to me.

Something else....
Today, Roberge is a sucessful businessman for Curran Company, where he and two of his brothers oversee the operations. The company specializes in fresh cut vegatables and has been in Roberge's family for over 40 years.
Posted by Dean Family at 8:26 PM