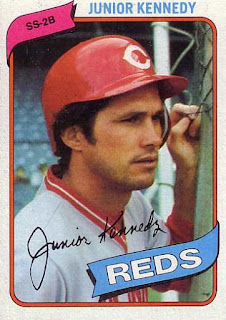 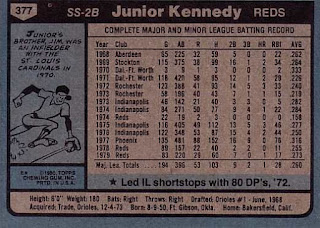 Who is this player
Junior Kennedy, second baseman, Cincinnati Reds

The Joe Morgan era in Cincinnati was over and the Reds were in a period of transition. For the 1980 season, Junior Kennedy would be the primary second baseman, starting the majority of the games but still sharing time with Ron Oester. As the season began, manager John McNamara did not definitively name either man as his everyday player, but Kennedy found his name in the lineup on Opening Day. Batting eighth, he contributed a Morgan-esque double, triple and three runs batted in. Kennedy earned his keep after that, batting a steady .261 with some small pop in his bat. The Reds would finish 1980 in third place, 3.5 games behind the division champion Astros. Below is a shot from April 1980 that shows both Kennedy and Morgan at a game in the Astrodome. 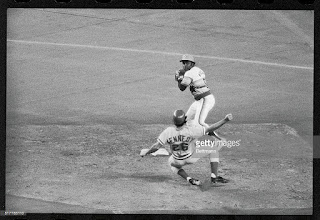 Junior Raymond Kennedy was his given name. Despite misconceptions, it was not Kennedy's nickname, even with an older brother that had a cup of coffee with the St. Louis Cardinals in 1970. A fantastic athlete, he was the tenth overall pick of the Orioles in the 1968 amateur draft, names like Tim Foli, Thurman Munson and Bobby Valentine taken before him. He would never play for the Orioles, as he was part of the Ross Grimsley trade that sent him to Cincinnati prior to the 1974 season.

A starring performance in the American Association earned him a look by the Reds near the end of 1974, but the incredible depth on one of the all-time greatest teams kept him in the minors for the next few years. The right handed hitting Kennedy finally made the main roster in 1978 and spent the next four season as a reliable infielder both at the plate and in the field, telling reporters how happy he was just to be in the major leagues and fulfill his dream.

The successes of Ray Knight and Dave Collins with the Reds in 1979 was instrumental in Kennedy's insertion at second base. Even though Kennedy would tell reporters "I'm no Joe Morgan," fans were hopeful for another success story. In a way, they got one as Kennedy enjoyed his finest season in 1980 before being beaten out by Oester the following year.

Traded to the Chicago Cubs prior to 1982, he was the understudy for Bump Wills and the next year, Ryne Sandberg. His seven year major league career would end there in July of 1983. Another blog writes about his final days in Chicago, here. In 1986, he would be elected to the Bob Elias Kern County Sports Hall of Fame. Kennedy apparently still lives in the Bakersfield, California area, although not much is written about these days of what he has been up to. Any information on that would be greatly appreciated.

Why I love this card
I have spoken several times about photos of the Reds being taken at Tiger Stadium. This one is another example. The Tigers and Reds would play each other every year on an off-day exhibition to benefit charity. The 1979 game was in Detroit and several Reds made their 1980 card appearance there. This absolutely fascinated us that summer as Inter-league play was stuff that was only dreamed about. It was for the World Series - ONLY! To see a National League team in an American League park led to all sorts of What If? discussions that entertained 10-year olds for hours. It was a different era.

Something else...
One of Junior Kennedy's best game of the 1980 season came on May 20, 1980 against the Philadelphia Phillies. Kennedy recorded four hits in the Reds 7-6 win in Philadelphia and scored what would be the winning run in the ballgame. Through the miracle of the Internet, audio broadcast of this game exists here. Marty Brennaman on the call.
Posted by Dean Family at 9:16 AM