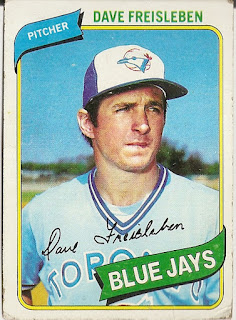 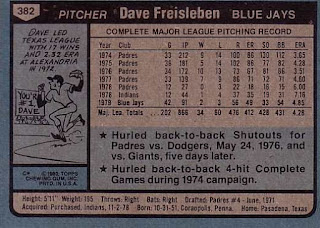 Who is this player?
Dave Freisleben, relief pitcher, Toronto Blue Jays
By the time this card was being pulled from packs in the 1980 season, Dave Freisleben had already appeared in his final major league game. Dave had already moved on from Toronto and had signed a contract with the California Angels. The Angels, however, released him shortly before Spring Training had ended and he was unable to catch on with another team. He did pitch for the Monterrey Sultanes in the Mexican League that year, but his six year major league career had come to an end.

Today, when you Google the name Dave Freisleben, two bits of trivia are the most prominent. The first was arguably the best pitching performance of his major league career, a 13 inning shutout against the Cincinnati Reds on August 4, 1974. It was ultimately a 14 inning game and despite his excellent outing, Freisleben did not get the decision.

The second is that his photograph wearing the potential road uniforms of the National League club in Washington pending the transfer of the San Diego Padres to D.C. for the 1974 season. 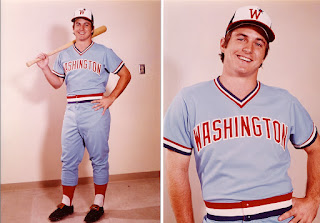 He started his big league career quickly, winning two complete-game efforts to start the 1974 season and then defeating future Hall of Famer Steve Carlton in his third start. However, the league would eventually catch up with Freileben. He struggled with his control, walking over 100 batters, and finishing in the top five in wild pitches and hit batsmen. Nonetheless, he was named by San Diego sportswriters the Padres' rookie pitcher of the year.

Freisleben would be a mainstay in the Padres' starting rotation for the next three seasons (1975-1977), with a highlight coming in 1976 when he was named Player of the Week for his two shutouts on May 24 and May 29th.

Injuries began to befall Dave, and his spot in the rotation was lost. He tried working his way back, but struggled before the Padres traded him to the Cleveland Indians in 1978. At the end of the season, he was traded again, this time to the Toronto Blue Jays where he would spend his final major league summer in 1979.

In retirement, he coached in the minor leagues, but also had a long career in law enforcement. He was honored by his high school and even spent some time playing golf professionally. Today residing in his native Texas, he his active on Facebook and Twitter and working as a Galveston Bay Fishing Guide.

Why I love this card
Often times, the kids in the neighborhood had trouble pronouncing certain players names. John D'Acquisto, Ivan DeJesus, Gary Rajsich. Dave Freisleben was one of those players. It got to the point that there was no consensus on how to pronounce his name and everyone had their own variation. So much so, that it ended up delving into calling Dave "Funky Winkerbean," off of a comic character in the newspaper at the time. Apparently, that was all we could agree on as 10 year olds.

Something else...
For reference (and for those who may not recall), here was the comic we were referencing. It had nothing to do with baseball and none of the characters had any common ground, it was just a silly word association that I can recall 36 summers later. 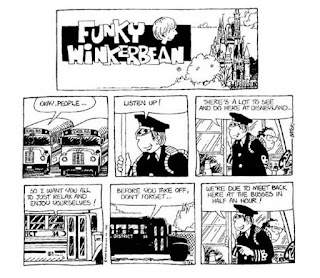